Ohtani (11-8) allowed two hits — a single for George Springer in the first, and a two-out double for Vladimir Guerrero Jr. in the third — in his career-best 11th win.

“I thought he put the foot down about the second or third inning, and you could just kind of see it change in how he was going about it,” interim Angels manager Phil Nevin said.

David Fletcher had three hits and scored the winning run on Luis Rengifo’s single in the sixth.

Jimmy Herget finished the two-hitter as the Angels won consecutive games after losing the previous six, blanking the Blue Jays for the second day in a row.

Los Angeles, which won 12-0 Friday, leads the AL with 16 shutouts. It’s the fourth time this season the Angels have recorded back-to-back shutouts.

“It doesn’t matter if Ohtani was on the mound over there or Roger Clemens,” Manoah said. “My job was to come out and compete, give the team my all and do everything I can to try and get us a win.”

Speaking through a translator, Ohtani said he enjoyed going up against Manoah in an “electric” atmosphere before a sellout crowd of 45,311.

“I was expecting a pitcher’s duel and didn’t want to give up that first run,” Ohtani said. “I’m sure it was the same for him.”

Velazquez hit his eighth homer against Anthony Bass in the ninth. He also went deep on Friday.

“He kind of flipped the script a little bit and went to his heater a little bit more,” Blue Jays interim manager John Schneider said. “When you’ve got 100 in your back pocket, it’s a pretty good weapon to have.”

Herget retired all six batters he faced for his third save in four chances.

At the plate, Ohtani walked in the first, struck out in the fourth and reached on a fielder’s choice in the sixth.

While awaiting a 3-2 pitch from right-hander Yimi Garcia in the eighth, Ohtani asked for time and backed out of the box. Umpire Shane Livensparger didn’t grant the request but Garcia’s pitch missed high, giving Ohtani his second walk.

“I think either manager was going to be upset,” Nevin said. “The inning before, (Livensparger) gave a pretty late timeout to (Blue Jays outfielder Raimel) Tapia with Shohei.”

Already angry about Ohtani’s walk, Schneider was ejected for arguing with Livensparger after Garcia walked the next batter, Mike Ford, on five pitches. The ejection was Schneider’s first.

Manoah cruised through five innings before running into trouble in the sixth.

Fletcher led off with a single and Mike Trout walked before Ohtani beat out a potential double-play grounder, with the call at first base overturned on replay. Rengifo drove in Fletcher with a first-pitch single to left.

Springer started in center field for the first time since being activated off the injured list Aug. 15. Springer’s sore right elbow had limited him to DH duties since returning.

Springer singled in his first at-bat, extending his season-long hitting streak to 11.

In lieu of a ceremonial first pitch, slugger Joe Carter and pitcher Mike Timlin recreated the final out of Toronto’s extra-inning Game 6 win in Atlanta, which came when Timlin fielded Otis Nixon’s bunt to the mound and tossed to Carter at first.

Angels outfielder Ryan Aguilar got his first career hit in the fifth, a double to right, but Blue Jays outfielder Jackie Bradley Jr. threw Aguilar out at third base by a wide margin.

“We’ll chain him to second base next time,” Nevin joked.

Toronto was shut out in consecutive games for the first time since home losses to Minnesota on May 6 and 7, 2019.

Blue Jays: OF Teoscar Hernández (left foot) did not start. Hernández fouled a ball off his foot in the first inning Friday and left the game in the third. 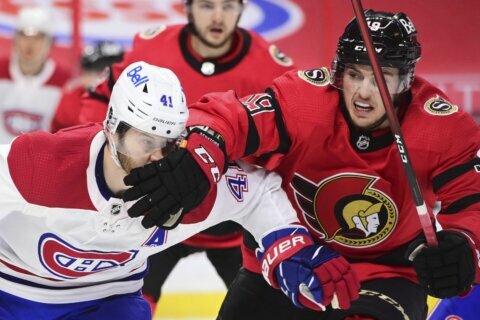