LOS ANGELES (AP) — A few days after the Padres outmaneuvered the Dodgers for Juan Soto, San Diego rolled into Chavez Ravine with a formidable new lineup and big plans to raise a few questions about Los Angeles’ dominance.

The Padres are headed home from a sobering weekend knowing the Dodgers still have all the answers.

Freddie Freeman had two RBI singles in the major league-leading Dodgers’ eighth consecutive victory and their 30th in 35 games. LA’s fans chanted “Sweep! Sweep!” as three days of near-complete dominance ended with Soto being forced out at second on Manny Machado’s grounder.

“It definitely feels good,” Bellinger said after his second multi-homer game against San Diego this season. “That being said, they got better. Their lineup got better. We came in and played our game. We played the game the right way.”

The Dodgers’ sweep was a strong reply to San Diego’s bold moves at the trade deadline to acquire Soto, Josh Bell and Brandon Drury. After largely standing pat at the deadline, Los Angeles coolly opened up a whopping 15 1/2-game lead in the NL West while outscoring the second-place Padres by a combined 20-4 in three victories at Dodger Stadium.

“We just played all-around good baseball,” Dodgers manager Dave Roberts said. “Those guys came out in the first inning (Friday) and really taxed (Tony) Gonsolin, and from that point on, I thought we controlled the entire series.”

All weekend long, the Dodgers claimed they weren’t sending any messages to the rival that recently raised the stakes in an attempt to take them down.

“No, that wasn’t the intent,” Anderson insisted. “Our plan is to go out and try to win every day. Doesn’t matter if their uni is brown and yellow, or if it’s green or whatever.”

Some messages don’t have to be sent to be received: The Padres know they’ve got a way to go after they dropped to 1-4 with four consecutive defeats since their new sluggers arrived Wednesday, culminating in only their second shutout loss since May 18.

“They swept us here,” San Diego manager Bob Melvin said. “We did not expect that coming in, and we have to do better. Any way you slice it up, it’s not what we were looking for. We’ve got to go home, get some good games under our belt and get on a roll.”

The team sometimes known as Slam Diego also hasn’t homered during its four-game skid, and it managed only two hits in the series finale. Los Angeles has won 17 of its last 19 meetings with the Padres.

“We made these trades, we had a really good first game, and then we’ve not been able to follow it up,” Melvin said. “You can have an All-Star lineup, and if you don’t hit, it’s not going to look good and it’s not going to be exciting. … Everybody is having a tough time with them, but we have the type of team that should give them a better run for their money than we did this series.”

Anderson (13-1) added to his breakout All-Star season by going at least seven innings for the sixth time. Yu Darvish (10-5) was almost as good for the Padres, yielding seven hits over six solid innings.

But Bellinger connected in the fourth and added a solo shot in the seventh while going 3 for 3 in his 15th career multi-homer game. Max Muncy and Mookie Betts had two hits apiece for the Dodgers, who rapped out 33 hits in the series.

Freeman drove in Betts in the third and plated Trea Turner in the seventh after Bellinger’s 15th homer of the season.

Soto went 0 for 2 with two walks, going hitless for the first time since joining San Diego in one of the biggest trades in baseball history. Soto was entertaining while wearing a microphone for the ESPN broadcast early in the game, but his frustration was evident when he grounded into a double play to end the sixth.

The Dodgers’ pitching staff allowed just one earned run in the three-game series. LA has permitted a major league-low 345 runs this season.

Padres: SS Fernando Tatis Jr. got the first game action of his lengthy injury rehab this weekend with Double-A San Antonio. There’s still no official timetable for his return from wrist surgery in March.

Dodgers: After a day off featuring the return of Clayton Kershaw’s charity ping pong event, Julio Urías (11-6, 2.57 ERA) takes the mound Tuesday to open a two-game interleague series against Minnesota. 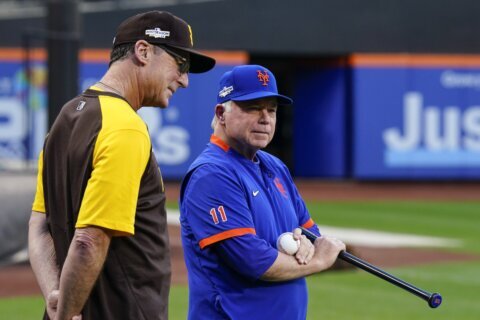 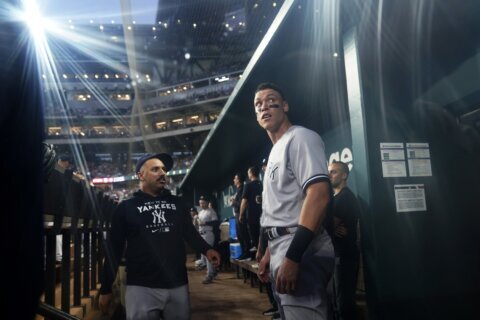