Pete Alonso hit his 31st homer off the advertising signage in left field during a three-run third. The Mets increased their NL East lead over the idle Atlanta Braves to two games.

DeGrom (3-1) retired the first 13 batters, eventually allowing three hits and walking one. He has a 2.15 ERA and has struck out 46 while walking just two in 29 1/3 innings spanning five starts since his return from elbow and scapula injuries.

“Jake was great — shocker,” Alonso said. “It’s great to have him back.”

DeGrom, pitching on six days rest so the Mets could get Taijuan Walker back into the rotation earlier this week, was perfect until Jose Iglesias had an infield single with one out in the fifth. Randal Grichuk followed with a double down the third base line but deGrom struck out Sam Hilliard and got Brian Serven to line out to right.

“Sometimes guys get a little extra rest (and) aren’t quite as crisp,” Mets manager Buck Showalter said. “But he was the difference in the game for us.”

Ryan McMahon, who saw a total of 11 pitches in his first two at-bats against deGrom, hit a 436-foot homer with one out in the sixth — the longest homer off deGrom since Kris Bryant’s 436-foot drive in 2015.

DeGrom threw 87 pitches, eight fewer than the season high he set against the Braves in his previous start. But with deGrom preferring a chance to complete an inning, he agreed with the decision to exit after six innings.

“You had eight pitches to work with (in the seventh), that’s probably pretty tough to do,” deGrom said. “So I think just being around the same spot a couple times, next time, hopefully, I’ll be out there for 100-plus (pitches).”

The Rockies left the bases loaded against Seth Lugo in the seventh. Closer Edwin Diaz worked around a hit and a walk in the eighth while facing the middle of Colorado’s order.

Adam Ottavino threw a perfect ninth for his first save since Sept. 1, 2021, when he was a member of the Boston Red Sox.

Alonso, who singled in his first at-bat, has multiple hits in consecutive games for the first time since July 31-Aug. 1. He was hitting just .167 in his previous 13 games.

“He feels awful when he doesn’t always deliver,” Showalter said. “So I think everybody felt good for him tonight, because I know how much it means to him to contribute every night.”

Ryan Feltner (2-5) lasted 4 2/3 innings and was charged three runs on six hits. The right-hander, who went to a three-ball count on eight of the 21 batters he faced, walked two and struck out two.

Mori was scheduled to throw out the first pitch prior to a game against the Seattle Mariners on May 16 as part of Japanese Heritage Night and one day before the first Japan Parade in New York City. But Mori arrived at the mound just after the famously intense Max Scherzer began his warmups. An equally amusing and awkward scene played out throughout Scherzer’s routine before Mori exited the field.

There were no such snafus Thursday, when Mori threw the first pitch to Masato Yoshii — the former Mets and Rockies pitcher — at 6:53 PM, about 15 minutes before deGrom headed out of the dugout to warm up to “Simple Man.”

THE BALK THAT WASN’T

For a split second in the sixth inning, deGrom believed he’d committed the first balk of his nine-year career.

With Brendan Rodgers at first base following a walk, Charlie Blackmon — the 5,080th batter deGrom has faced in the majors — and home plate umpire Chad Whitson yelled repeatedly for time. DeGrom, who was already in his familiar mitt-at-his-face pose, came out of his set instead of stepping off the mound.

A base umpire, believed to be Adam Hamari at third base, called for a balk and Rodgers began trotting to second as deGrom and Showalter began pleading their cases.

“I think the home plate umpire was saying ‘time’ too,” deGrom said before putting his hands to his face. “I was kind of here, I was like looking and then I heard ‘time, time, time.’ So at that point, I’m thinking, OK, it’s not a balk, so I just moved my hands first. And I was like ‘Wait, wait, wait. You guys said time.’”

After a brief consultation, Whitson ordered Rodgers back to first. DeGrom whiffed Blackmon and induced C.J. Cron to ground to shortstop, forcing Rodgers and ending the inning.

“I thought I did balk,” deGrom said with a grin.

DeGrom’s 5,081 batters faced without a balk are the 48th most all-time and 11th-most among players to debut since 1961, the start of the expansion era.

Rockies: RHP Chad Kuhl (right hip) was activated from the 15-day injured list and is slated to return to the rotation Friday. Black said Kuhl, who threw 86 pitches in a rehab start for Triple-A Albuquerque last Saturday, should be able to handle his usual workload against the Mets. To make room for Kuhl on the roster, RHP Robert Stephenson was designated for assignment.

Mets: INF Eduardo Escobar (left oblique) began a rehab assignment with Single-A Brooklyn and went 2 for 4 while playing seven innings at shortstop — a position at which he hasn’t started in the majors since 2018. Escobar could return this weekend. 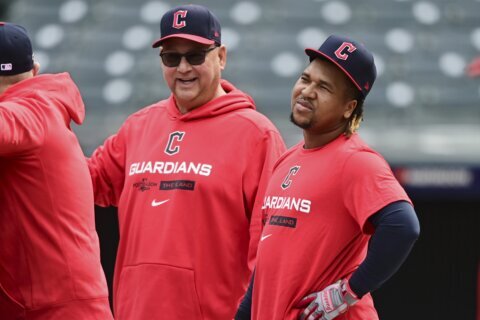 Ready or not: Guardians’ kids set for playoff debut vs Rays 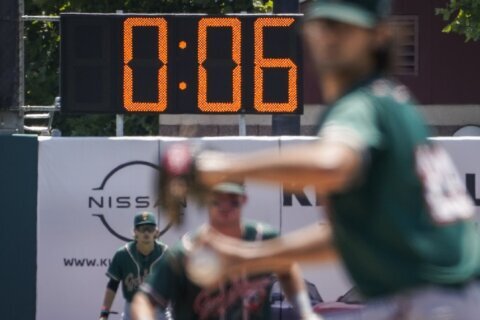