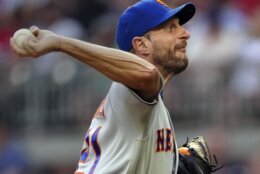 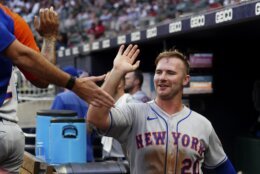 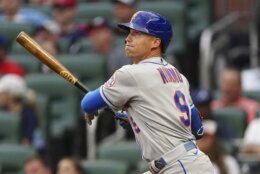 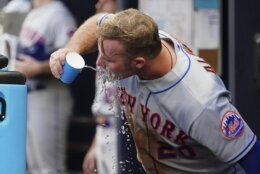 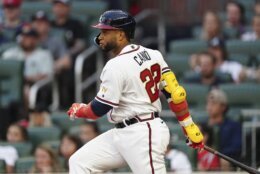 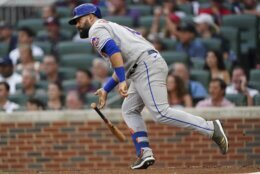 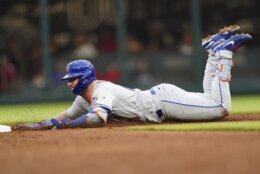 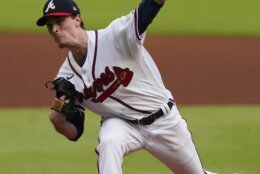 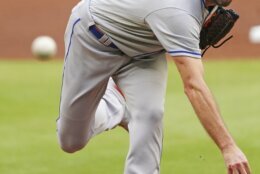 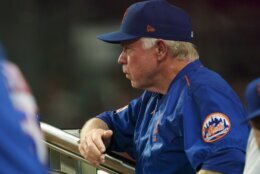 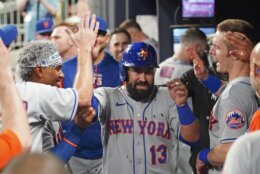 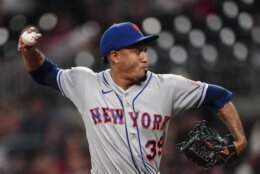 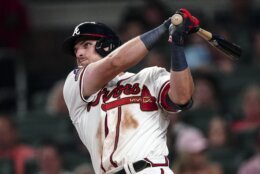 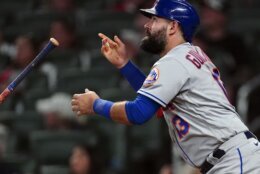 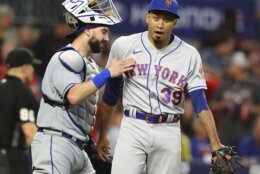 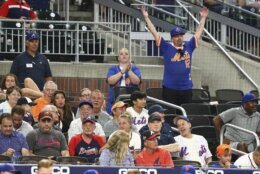 ATLANTA (AP) — In what he called “a measuring-stick win” in the opener of an NL East showdown, Max Scherzer was the difference-maker for the New York Mets.

“They’re a great team over there and you want to come out and play your best baseball,” Scherzer said.

The right-hander was very close to his very best. Thanks to Scherzer’s outstanding performance, the first-place Mets stretched their division lead over the Braves to 2 1/2 games.

“It makes it great when you have the guy behind you throwing zeros,” Guillorme said. “Everybody knows one or two might be enough when he’s in the game.”

Pete Alonso also had two RBIs and Scherzer (6-1) gave up only three hits, including Austin Riley’s 24th homer in the seventh. That cut the Mets’ lead to 2-1, but Guillorme answered with his homer off Darren O’Day in the eighth.

All-Star closer Edwin Díaz, pitching for the third straight day, struck out the side in the ninth for his 19th save.

Former Mets second baseman Robinson Canó, obtained by Atlanta for $1 in a minor league deal with the San Diego Padres on Sunday, had two hits in his Braves debut.

Scherzer had nine strikeouts with no walks in his second consecutive impressive start after missing almost seven weeks because of an oblique injury. The right-hander threw six scoreless innings, allowing only two hits, with a season-high 11 strikeouts in a no-decision against Cincinnati last Tuesday.

“For the second time out, that was really, really good, I thought,” Braves manager Brian Snitker said.

Scherzer did not feel any lingering effects from the oblique issue.

“I feel like the injury is really behind me now,” he said.

Mets manager Buck Showalter said Scherzer overcame the challenge of “facing a really good team on the road in an atmosphere that was conducive to the home team. He’s a difference-maker.”

Through 6 2/3 innings, Canó had Atlanta’s only hit off Scherzer, a single past Guillorme’s glove at second base with two outs in the third.

Riley lined a homer over the left-field wall with two outs in the seventh, ending Scherzer’s shutout bid. Marcell Ozuna followed with a double down the left-field line, but Scherzer pumped his right fist after striking out Eddie Rosario to end the inning.

Canó singled off Adam Ottavino with two outs in the eighth and moved to third on a double by Ronald Acuña Jr. Ottavino escaped on Dansby Swanson’s groundout.

Despite the walks, Fried has allowed no more than two earned runs in nine of his last 10 starts.

Alonso added an RBI grounder in the ninth off Jackson Stephens to drive in Nimmo from third, increasing his major league-leading total to 72 RBIs.

RILEY ON A ROLL

Riley’s homer was his third in three games. He ranks second in the National League and is tied for fourth in the majors with 24. It’s the third streak of homers in three or more consecutive games in his career. Last season, he had homers in four straight games from July 27-30.

Guillorme hit only his second homer of the season. Each has come against Atlanta. He hit his third career homer on May 4 against the Braves in New York.

“Sometimes it’s better to be lucky than good,” Guillorme said. “I was just trying to put a good swing on the ball. … It doesn’t happen that often for me, but it’s great when it does.”

Mets: RHP Jacob deGrom (stress reaction, right scapula) is scheduled to make his third minor league rehab start for Triple-A Syracuse on Thursday and could be activated soon after the All-Star break. … All-Star 2B/OF Jeff McNeil was placed on the paternity list. … OF Travis Jankowski (broken left hand) started in right after he was reinstated from the 10-day injured list. … RF Starling Marte (left groin tightness) was held out for the second consecutive game.

Braves: RHP Kenley Jansen (irregular heartbeat) threw in the bullpen and appears set to return from the 15-day injured list this week. … OF Adam Duvall was reinstated from the paternity list. … With Canó’s acquisition, INF Phil Gosselin was designated for assignment and 1B Mike Ford was optioned to Triple-A Gwinnett.

Hard-throwing RHP Spencer Strider (4-2, 2.60 ERA) will try to continue his impressive rookie season for Atlanta when he faces LHP David Peterson (5-1, 3.48) in the middle game of the series Tuesday night.

Padres to stop slide in matchup with the Giants

Diamondbacks play the Pirates in first of 4-game series