ANAHEIM, Calif. (AP) — Shohei Ohtani is putting to rest any doubts anyone might have had about whether he could…
Listen now to WTOP News WTOP.com | Alexa | Google Home | WTOP App | 103.5 FM

ANAHEIM, Calif. (AP) — Shohei Ohtani is putting to rest any doubts anyone might have had about whether he could exceed what he accomplished during last year’s AL MVP campaign.

The two-way Japanese phenom won his sixth straight start by striking out 12 in six innings and also hit a two-run triple in the Los Angeles Angels’ 7-1 victory over the Houston Astros on Wednesday night.

“The last few starts, unfortunately we’ve lost a couple going into it and he takes that personally. He understands how important his day is,” manager Phil Nevin said after the Halos snapped a five-game losing streak. “His last three or four times, he has put the team on his back.”

It’s the third time this season Ohtani has had double-digit strikeouts and multiple RBIs in a game. The only other pitchers to accomplish that are Atlanta’s Kevin Millwood in 1999 and Hal Newhouser with Detroit in 1946.

It was Ohtani’s final start on the mound before next Tuesday’s All-Star Game just up at the road at Dodger Stadium. The reigning AL MVP was selected to his second straight All-Star Game as a hitter and a pitcher.

Houston manager Dusty Baker, who is managing the AL squad, said it’s a possibility Ohtani could start on the mound for the second straight year.

“I mean, as a starting pitcher, it is a special spot to start in the All-Star Game,” Ohtani said through his interpreter. “That’s something that I shoot for and I would like to do, but I’m sure there’s other pitchers that have better numbers than me at this point. I tried my best to try to match up with them tonight and ultimately it’s up to Dusty Baker.”

Ohtani also hasn’t made a final decision about participating in Monday’s Home Run Derby. Seven of the eight participants have been announced, but the deadline to decide is Thursday because ESPN will be releasing the bracket.

“I haven’t really discussed how I’m going to be used in the game with anyone. I don’t really have an answer,” Ohtani said. “It’s really gonna depend on how many innings I pitch or how many at-bats I’m gonna get. If it is going to be too much, then I’ve got to balance at this point.”

Luis Rengifo had three hits and drove in a pair of runs with a bases-loaded single in the sixth for the Angels. Mike Trout sat out with back spasms.

Houston’s Cristian Javier, who struck out 14 Angels on July 1, went only 3 2/3 innings and allowed three runs but had 10 strikeouts. The last time a major league starter went less than four innings and recorded double-digit Ks was Cleveland’s Danny Salazar in 2014.

“He threw the ball well, he just didn’t have the command. They fouled off a bunch of pitches too,” Baker said of Javier.

Yuli Gurriel’s RBI single in the fourth inning drove in Kyle Tucker and was the first earned run Ohtani allowed in 31 2/3 innings It was the longest run by a Halos starter since John Lackey went 30 2/3 innings in 2006.

Ohtani equaled Hall of Famer Nolan Ryan in two areas Wednesday. He’s the first Angels hurler since Ryan to post double-digit strikeouts in four straight games. Ohtani’s two-run triple into the right-field corner in the second inning, which extended the lead to 3-0, made him the first Angels starter since Ryan in 1972 to hit a three-bagger.

There were a combined 32 strikeouts by both teams, an American League record for a nine-inning game. The Angels struck out 17 times and the Astros 15.

Two of the Angels’ 12 hits came on bunt singles, including Brandon Marsh’s down the third-base line to bring home Jonathan Villar in the third inning for the game’s first run.

Angels: RHP Jimmy Herget (right shoulder impingement) threw a bullpen session Tuesday with another planned at the end of the week.

With Trout sitting out, outfielder Jo Adell was called up from Triple-A Salt Lake. This is Adell’s third stint at the major-league level this season. Monte Harrison was designated for assignment. Adell had two hits, including an RBI single during a four-run sixth inning that put the game away.

The teams conclude their series Thursday. Astros’ LHP Framber Valdez (8-4, 2.64 ERA) has a 7-4 career record against the Angels. Los Angeles has not named a starter. 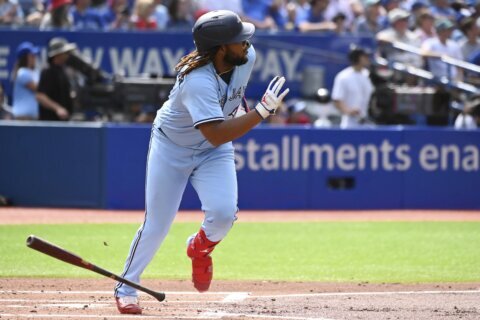 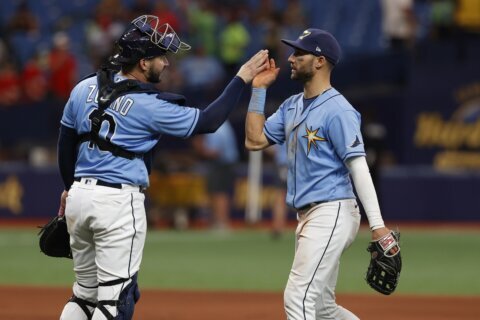