Angels two-way star Shohei Ohtani takes a scoreless streak of 21 2/3 innings to the mound when he starts at Miami.

The reigning AL MVP will pitch a day after his 28th birthday. This will be his first career pitching appearance against the Marlins, who have won six in a row.

Houston right-hander Cristian Javier is coming off two incredibly dominant starts as the Astros go for their ninth consecutive victory when they host the Kansas City Royals.

In his last outing, Javier struck out a career-high 14 while holding the Angels to one hit in seven innings. The time before, he fanned 13 in seven innings and combined with the Astros bullpen in a no-hitter at Yankee Stadium.

The 27 total strikeouts are the most in a two-game span by a pitcher who allowed just one hit in the modern era (since 1900), ESPN Stats & Info said.

Javier walked only one batter in that span. The 25-year-old has won three straight starts overall for the AL West leaders.

Brayan Bello, the top pitching prospect in Boston’s system, is set to make his major league debut as he faces Tampa Bay at Fenway Park.

Also, Red Sox ace Chris Sale is scheduled to make a rehab start for Triple-A Worcester. The left-hander has been out since spring training because of a stress fracture in his ribcage.

Dodgers outfielder Chris Taylor is headed to the injured list after a CT scan revealed a fracture in his left foot. He got hurt last weekend and exited Monday’s game when it swelled.

Dodgers manager Dave Roberts is hoping Taylor will be back in a couple of weeks.

Los Angeles did get some good news when closer Craig Kimbrel’s CT scan came back clean. He will be available Wednesday.

Kimbrel took a line drive off his back last week.

San Francisco tries to stop a six-game skid when it plays at Arizona. The third-place Giants have fallen 10 1/2 games behind the rival Dodgers, who lead the NL West. Alex Cobb (3-3, 4.95 ERA) faces Diamondbacks right-hander Merrill Kelly (7-5, 3.46).

The AL Central-leading Twins will be minus Chris Archer for a bit after the pitcher was put on the 15-day injured list because of tightness in his left hip.

Minnesota made the move before Archer was scheduled to start against the White Sox. It was retroactive to Saturday.

The 33-year-old Archer joined the Twins in the offseason and has done well, going 2-3 with a 3.08 ERA in 15 starts. He’d pitched in only six games during the previous two seasons because of injuries.

The Twins are hoping Archer will be able to rejoin the club before the All-Star break later this month. 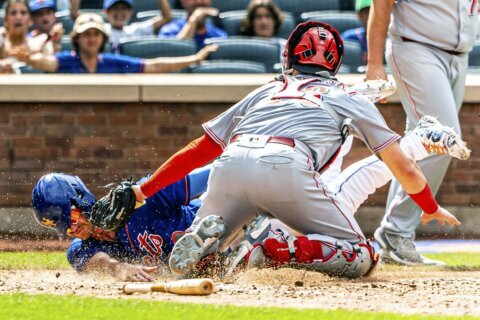