It turns out that Rodón was the one to light the flame.

The left-hander retired 22 of the final 23 batters to finish a three-hitter for his third career complete game and Wilmer Flores hit a two-run homer in the eighth inning for the Giants, who beat the San Diego Padres 3-1 on Saturday.

Rodón (8-5) was brilliant after allowing his only run in the second inning. He got Kim Ha-seong to ground into a double play to end the second, and then was one out away from throwing seven perfect innings to end it before he walked Luke Voit. The left-hander struck out Jorge Alfaro to end his outstanding afternoon.

The Giants had lost two straight and nine of 11 coming in.

“Anytime you lose multiple games in a row you want to be the guy that’s the stopper,” Rodón said. “That was kind of the goal today, go out there, give my best effort. In my head I wasn’t thinking, ‘I’m going to throw a complete game today.’ No, I’m just going to go compete and whatever happens, happens. Good things happen when you go out there and compete.”

After walking Voit in the ninth, Rodón peeked over at the dugout.

“I knew they weren’t going to do anything but I was just reassuring them that I was OK,” he said.

Alfaro was going to be his last batter. “In a lot of ways he needed to be out there for the last out of the game,” manager Gabe Kapler said.

“Winning cures anything, right?” Rodón said when asked about his comments after his last start. “We showed a lot of guts today.”

He said he was frustrated after that start and that “I think this team is a lot better than what we’ve shown the last couple weeks and I think we’re headed in the right direction. That’s kind of why I said it.”

It was his first complete game since April 14, 2021, against Cleveland.

“They’re hard to come by, I guess,” Rodón said.

“It’s interesting; last time he mentioned that we needed to play with more fire,” Kapler said. ”It’s great when the guy who says that comes out and provides the fire. That’s exactly what he did.”

Rodón had 10 of his 12 strikeouts from the third inning on. He walked two. Rodón struck out Padres All-Star Manny Machado in three straight at-bats. Machado had hit big homers in leading the Padres to wins in the first two games of the series.

“A lot of respect for Manny when he’s at the plate. As far as figuring him out, today was my day and today wasn’t his. He’s gotten me and I’ve gotten him,” Rodón said.

The left-hander allowed three singles in the second to load the bases, and the Padres got their only run on first baseman Brandon Belt’s error.

San Diego’s Yu Darvish allowed a run in the second and then settled down to blank the Giants for five innings before making way for Luis Garcia starting the eighth.

Garcia walked All-Star Joc Pederson with one out before Flores drove a 1-2 pitch into the left field seats, his 10th.

The Giants loaded the bases with no outs in the second and came away with just one run, on Brandon Crawford’s sacrifice fly. Darvish retired Mike Yastrzemski and Austin Wynns to get out of the jam. 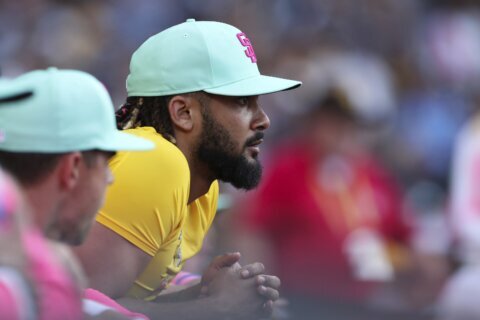