ATLANTA (AP) — After a slow start to the season, Braves shortstop Dansby Swanson has turned it around and is…
Listen now to WTOP News WTOP.com | Alexa | Google Home | WTOP App | 103.5 FM

ATLANTA (AP) — After a slow start to the season, Braves shortstop Dansby Swanson has turned it around and is sizzling at the plate.

His team is following suit.

Swanson hit two home runs and the Atlanta Braves built a big lead early before holding off the San Francisco Giants 7-6 Thursday for their 18th win in 21 games this month.

“It’s definitely been a good one,” said Swanson, who’s hitting .385 over his last 30 games to boost his average to .302. “I’ve been working to keep things simple. Most people have gotten to know me pretty good around here, and everything I do is with the mindset to win games. I’m just going to continue with that and put us in a position to be successful.”

Swanson, who homered to begin a three-run rally in the ninth inning for a 4-3 win over the Giants a night earlier, had three hits and drove in three runs.

He hit a leadoff home run in the first and connected again in the fourth, his 12th, for a 7-1 lead. It was his seventh career multihomer game, the last coming Aug. 14, 2021, at Washington.

The defending World Series champion Braves moved 11 games over .500 for the first time this season. They have won 10 of their last 11 home games, outscoring the opposition 67-39 and hitting 26 homers to opponents’ 12.

Atlanta closed within four games of the New York Mets in the NL East.

“There’s a lot of confidence flowing,” Swanson said. “I feel like we’ve done a really good job of staying true to ourselves and kind of finding our identity as a team.

San Francisco, which grounded into four double plays in the first four innings, has dropped four of five.

“It felt like we were an inning short,” Giants manager Gabe Kapler said. “They made one more pitch, made one more play, advanced one more base than we did. I personally don’t take a lot satisfaction in being close in games.”

Wright got Evan Longoria to ground into a double play with the bases loaded to end the first. He gave up an RBI single to Curt Casali in the second and a homer to Austin Slater that made it 7-2.

Tommy La Stella hit an RBI double as the Giants scored twice in the sixth and chased Wright. Jesse Chavez relieved and walked pinch-hitter Brandon Belt to load the bases before Mike Yastrzemski struck out for the fourth time to end the threat.

Will Smith gave up Slater’s RBI single in the eighth to make it 7-5.

Kenley Jansen recorded his 19th save in 22 chances and the 369th of his career to pass Jonathan Papelbon for 10th place on the career list. Joc Pederson, who played for the Braves last year, hit his 16th home run, sending a two-out drive into the second deck of the Chop House restaurant in right field.

Wood (5-6) was charged with four hits and six runs after pitching one inning and retiring none of the six batters he faced in the second. Wood, who recorded his 1,000th career strikeout when d’Arnaud whiffed, began the game 3-0 with a 1.47 ERA in three career starts at Truist Park.

This was the second-shortest start of Wood’s career. The shortest came July 9, 2015, at Colorado when he pitched for Atlanta and sustained an injury after two pitches.

“That’s the way it goes sometimes. I’ll just get back on the horse and get ready for the next one.”

NOT FANNING THE FLAMES

Pederson said he hopes the fans in San Francisco won’t take it too far when Cincinnati comes to Oracle Park and Tommy Pham is playing outfield for the Reds. Pham slapped Pederson in the face over a fantasy football dispute three weeks ago in Cincinnati before a game.

“It’s an unfortunate incident, and I feel like we’ve moved past it,” Pederson said. “It was an off-field issue, handled and moved on. It’s in the rear-view mirror.”

Pederson added he’s had no contact with Pham since the incident.

The Braves won the season series 3-1. … Atlanta has won 12 straight against lefty starters and is 18-7 overall.

Giants: OF Luis González was placed on the 10-day injured list with a lower back strain and missed his second straight game. INF Donovan Mitchell was recalled from Triple-A Sacramento. … SS Brandon Crawford was out of the lineup for the second straight day with a left knee contusion. … 1B Brandon Belt didn’t start as scheduled, but walked as a pinch-hitter. … 1B LaMonte Wade (left knee inflammation) is moving closer to ending his rehab assignment.

Braves: RF Ronald Acuña Jr. and 3B Austin Riley each had a scheduled day off.

San Francisco OF Steven Duggar was dealt to Texas for OF Willie Calhoun. 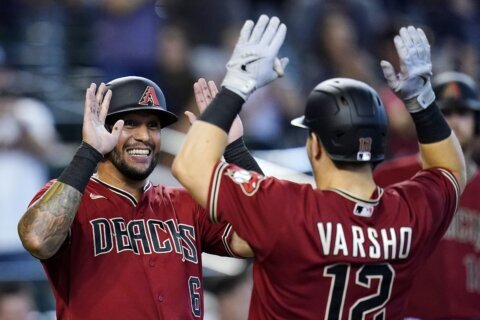 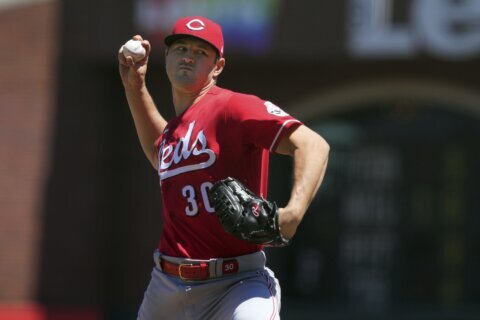