CLEVELAND (AP) — José Ramírez hit a run-scoring double to tie for the major league lead in RBIs, Shane Bieber pitched neatly into the fifth inning before a long rain delay and the Cleveland Guardians beat the Texas Rangers 4-0 Wednesday night.

Ramírez went 2 for 4 with a stolen base and his 54th RBI of the season, matching Mets star Pete Alonso.

Andrés Giménez had two doubles and an RBI, and Josh Naylor and Steven Kwan each singled twice as the Guardians moved back to .500 for the second time this week.

“I still don’t know what exactly happened with the delay, but even after all that happened, we made the most of it,” Bieber said. “You just try to take it in stride and realize you’re not the only person being bothered by it. A win is a win.”

Bieber recorded his 700th career strikeout by whiffing Mitch Garver in the fourth. The right-hander reached the milestone in his 93rd game, matching the second-fewest appearances to do so all-time behind Yu Darvish’s 87.

The Guardians led 4-0 in the fifth when crew chief Alfonso Marquez called for the tarp after Nathaniel Lowe’s one-out single. Bieber repeatedly cursed while walking off the field when play was halted — two outs shy of an official game — for 1 hour, 52 minutes.

“Everyone knew the implication of that inning, so I wasn’t the happiest,” said Bieber, who allowed three hits, struck out six and walked none in 4 1/3 innings. “I was obviously frustrated.”

The nine-inning game, which was delayed 15 minutes at the start, was completed in just 2:07, matching the total time of the two delays. Five Cleveland pitchers needed only 100 pitches to retire the Rangers.

“I thought Bieber was terrific,” Guardians manager Terry Francona said. “Unfortunately, he couldn’t keep going, which was frustrating because he was really good. Really good.”

Eli Morgan (2-1) worked 1 2/3 perfect innings when play resumed for Cleveland, including a pickoff of Adolis Garcia at second base before he threw a pitch. It was the franchise’s first pickoff at second by a pitcher since Bert Blyleven on July 9, 1985.

“Getting picked off didn’t help there, but the damage was already done,” Texas manager Chris Woodward said. “Today is a little different than most days and we were facing their best pitchers.”

Rangers starter Dane Dunning (1-4) gave up four runs and nine hits in four innings, extending his winless streak to seven starts. He is 1-10 in his career on the road.

García and Lowe had two hits apiece for Texas, which only advanced one runner past second base in losing for the sixth time in eight games.

“We just didn’t hit anything, which is more of a credit to them than anything we didn’t do,” Woodward said.

The Guardians have had seven games postponed due to weather at Progressive Field this year. Cleveland has played four home doubleheaders and has five twinbills remaining.

The teams’ Monday game was rained out, forcing the teams to play a doubleheader Tuesday. Texas won the nightcap 6-3 after losing the opener by the same score.

“The two words I’m tired of are ‘Lake effect (rain)’, but we haven’t figured out a way to beat it,” Francona said. “It seems like everybody likes to throw that in there when the weather doesn’t go according to plan.”

Guardians RHP Aaron Civale (left gluteal soreness) will work three innings Thursday for Triple-A Columbus at Indianapolis, marking his return to the mound after nearly three weeks. Francona said Civale will be limited to 50-55 pitches. Civale has not pitched since May 20 when he fell twice while mishandling a grounder against Detroit.

Rangers: RHP Jonathan Hernández (right elbow surgery) has made three appearances during his rehab assignment with Triple-A Round Rock, allowing one run in two innings. Hernández is working his way back from Tommy John surgery on April 12, 2021.

Rangers: RHP Glenn Otto (4-2, 4.24 ERA) starts Friday in the opener of a three-game series against the White Sox in Chicago. Otto has won a career-high three consecutive starts. 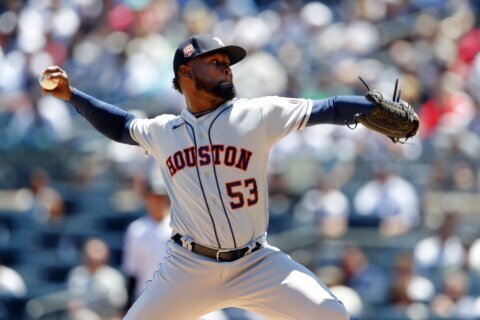 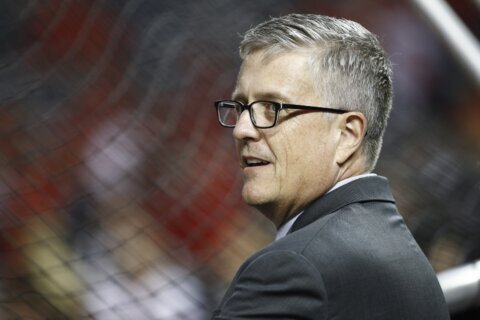 Astros 3 outs away from combined no-hitter at Yankee Stadium