PHILADELPHIA (AP) — Mike Trout flailed at strike three in the dirt his final at bat and a most miserable game was complete. The three-time AL MVP whiffed three times and went 0 for 4 in the Angels’ latest loss to extend his hitless streak to a career-worst 0 for 23.

“I’m just trying to get into a good position to hit,” Trout said. “And right now, I’m not.”

He’s not alone in struggling on an Angels team muddling through their longest losing streak in almost six years.

Zack Wheeler struck out nine over six solid innings and Johan Camargo had four RBIs to help the Philadelphia Phillies win 7-2 Saturday night and send Trout and the Angels to their 10th straight defeat.

Trout’s previous worst stretch was 0 for 21 in May 2018, and he struck out three times in a game for the fifth time this season.

Wheeler (4-3) picked up where he left off as the NL pitcher of the month for May when he went 2-0 with a 1.65 ERA and 40 strikeouts over five starts. The right-hander gave up two runs and six hits and was just the latest starter to stymie the Angels. Three relievers kept Los Angeles in check with one shutout inning apiece.

The Phillies won 10-0 a night earlier in interim manager Rob Thomson’s debut and kept mashing with five runs in the first inning. J.T. Realmuto ripped a two-run, bases-loaded double to left field and Camargo slashed a two-RBI single to right. Mickey Moniak’s RBI infield single off Angels starter Michael Lorenzen (5-3) made it 5-0 — and 15 runs over the first full nine innings of Thomson’s tenure.

Thomson said he received about 350 text messages after his first win since he was promoted from bench coach after Joe Girardi was fired.

“I’m still preparing certain things that I need during the game, but there’s less of that and it’s more about being with the players, communicating with them,” Thomson said.

Camargo added a two-run single in the eighth. Realmuto doubled a career-high three times and the Phillies won their third straight game.

Lorenzen settled down and struck out a career-high nine over 5 2/3 innings. He walked four batters in the first inning.

But it was yet another numbing loss for the Angels, who are on their worst losing streak since they dropped 11 straight from Aug. 4-15, 2016. Five straight losses have come on the current road trip that started against the Yankees.

“We’re just not hitting,” Angels manager Joe Maddon said. “We can’t cover any of our mistakes. You have to be able to cover a bad lie every once in a while. We’re not able to do that right now.”

The Angels have lost 14 of 17 games overall and played nothing like the team that started 24-13 and was tied for first in the AL West on May 15. The Angels have scored only four runs over the last four games. It could get worse: Los Angeles wraps the three-game series Sunday and returns home to play the Red Sox and NL East-best New York Mets.

The former mayor of Trout’s hometown of Millville, New Jersey, organized a trip for about 75 people and rented a suite to watch the outfielder play. Jim Quinn also made the trek the last time Trout played in Philadelphia in 2014. The red in this suite was for Trout T-shirts and jerseys, and Millville represented the entire town as fans cheered his at-bats. When a TV graphic identified Trout as a “Philadelphia Kid,” fans shouted “New Jersey!” When Trout struck out in his first at-bat, a fan mused, “he’s just slumping right now.”

“He’s such a good guy,” Quinn said. “He and I live close to the same Wawa. He goes to Jim’s Lunch, that’s his favorite place, so I see him there. People are very respectable toward him. I know some people criticize him for not being flamboyant. But he is what he is. He’s just such a nice guy. It’s just a good family all around.”

Phillies 3B Alec Bohm slammed his bat into the bat rack after he struck out in the first inning, only for him to miss the hole and have the bat spring back under his face and cut him. Blood flowed down his neck and stained his uniform.

Angels OF Taylor Ward did not start because of right hamstring tightness suffered a night earlier.

Phillies INF Nick Maton sat out with a sore right shoulder and is day to day after a hard landing on a catch Friday night. 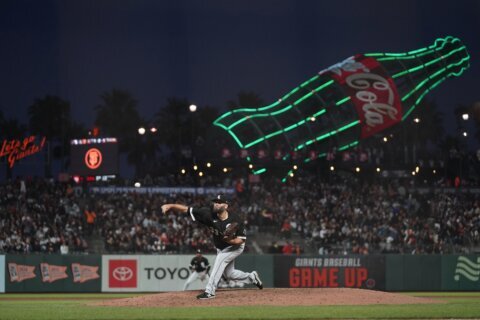 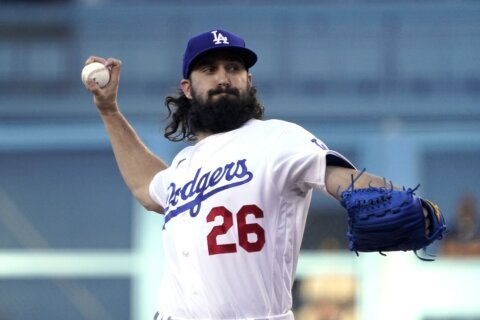 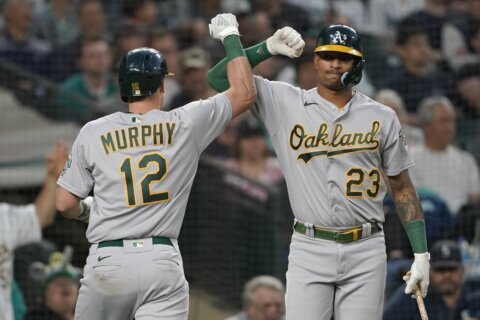