Santiago Espinal had three hits and a season-high three RBIs as the surging Blue Jays won for the 12th time in 15 games. Chicago was swept in the three-game series and has lost six of eight.

“I’d rather lose having a chance than not, but these are ones that you lose and you get angry,” manager Tony La Russa said. “You don’t get frustrated, you don’t get discouraged, you don’t pout. You just get angry and do something about it, be ready to play Friday.”

“He throws strikes and he gets people out,” Blue Jays manager Charlie Montoyo said. “His mindset, you don’t teach that. He has it.”

After struggling early in the year, Blue Jays batters have now recorded 10 or more hits in six consecutive games.

“We’re seeing how good they can be,” Manoah said of Toronto’s offense.

Leury Garcia and Luis Robert each singled to begin the first against Manoah, and a two-out walk to Gavin Sheets loaded the bases. Manoah escaped unscathed by catching Yasmani Grandal looking at a slider for strike three.

The strikeout of Grandal was the first in a streak of 16 consecutive outs for Manoah, who didn’t allow another baserunner until José Abreu singled to begin the seventh. Sheets followed by grounding into a double play.

Chicago’s Johnny Cueto (0-2) allowed three earned runs and seven hits in six innings. He walked none and struck out five.

“That club is hot and he didn’t give them much,” La Russa said.

Raimel Tapia scored twice and Hernández connected for a two-run homer, his third on the season, as the Blue Jays built a 4-0 lead after six innings. Hernández’s homer was his first since May 14 at Tampa Bay.

Manoah left after Robert hit a two-out, two-run double in the eighth. Adam Cimber came on to face Yoán Moncada, who cut it to 4-3 with an RBI single. Abreu flied out to end the threat.

Espinal had a two-run single and Bo Bichette added an RBI hit as Toronto pulled away with a four-run eighth against a trio of White Sox relievers.

Blue Jays: LHP Hyun Jin Ryu was placed on the 15-day IL because of a sore forearm and RHP Jeremy Beasley was selected from Triple-A Buffalo. … OF George Springer (non-COVID illness) sat for the second straight game. … Vladimir Guerrero Jr. started at DH and Cavan Biggio was at 1B.

Blue Jays 3B Matt Chapman stayed in the game in the eighth after being hit by a pitch from Reynaldo López that struck Chapman’s upper shoulder, then bounced off the earflap of his helmet. Montoyo said after the game that Chapman was feeling fine.

“I hate that part of the game,” La Russa said. “It’s accidental but that just leaves a bad feeling.”

The White Sox added RHP Jimmy Lambert, who took the roster spot of RHP Dylan Cease. Cease is on the restricted list, but could not be replaced until three days had elapsed since his last outing, Sunday against the Cubs.

With time on his hands as the DH, Guerrero was seen using a bat and baseball to line up a putt in the dugout while his teammates fielded in the sixth.

Tapia did a pair of pushups in the dirt cutout at home plate after sliding home safely with Toronto’s second run in the fifth.

Blue Jays: LHP Yusei Kikuchi (2-1, 3.48) gets the ball Friday as the Blue Jays open a three-game series against Minnesota. RHP Chi Chi Gonzalez is expected to make his season debut for the Twins. 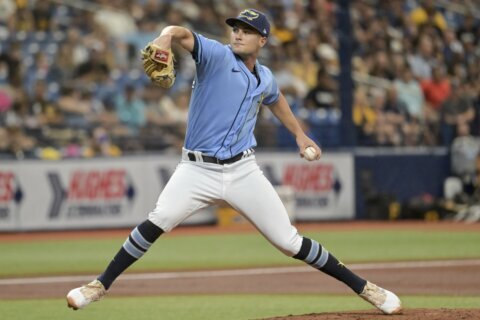