PHILADELPHIA (AP) — Garrett Stubbs hit a three-run homer with two out in the ninth inning, sending the Philadelphia Phillies to a dramatic 3-1 victory over the Miami Marlins on Wednesday.

Alec Bohm sparked the winning rally with a one-out single against Tanner Scott (2-2). Pinch-hitter J.T. Realmuto walked before Yairo Muñoz struck out swinging for the second out.

That brought Stubbs to the plate, and he drove a 2-2 slider deep to right for his third homer. He admired the drive for a few seconds before yelling toward the Phillies’ dugout and throwing his bat down in celebration.

It was his first career game-ending homer.

“I couldn’t tell you how I felt (at that moment),” Stubbs said. “There was a lot of excitement and a lot of adrenaline. By the time I got home, everyone was crowding me. I thought I would throw up afterward. The adrenaline was awesome.”

Kyle Gibson pitched eight-plus innings for Philadelphia before Connor Brogdon (2-0) got three outs for the win.

“Obviously, that one is disappointing with the way that we thrown the ball today to get to that point,” Marlins manager Don Mattingly said. “It’s disappointing. I’ve had enough of those for the year.”

Castano was promoted when right-handers Edward Cabrera and Cole Sulser were placed on the injured list before the game.

Castano, a 27-year-old left-hander, allowed five hits, struck out three and walked two. He retired Bryce Harper, Nick Castellanos and Didi Gregorius in a row after Rhys Hoskins’ leadoff triple in the sixth.

“It was just trying to execute one pitch at a time,” Castano said. “I tried to go hitter to hitter, not to make it too big, slow the game down. I thought we did a good job of that. I also made some not so good pitches but the defense made some good plays behind me.”

After another shaky outing in Tuesday night’s 11-9 loss to the Marlins, Thomson announced that Corey Knebel will take a step back from the closing role to focus on his mechanics.

Knebel, who signed a one-year, $10 million contract in the offseason to help solidify Philadelphia’s leaky bullpen, has blown four saves and posted a 4.91 ERA since May 5. He has walked 13 batters in 14 2/3 innings in that stretch.

“For the near future, we’ll put him in a position where he can breathe a little because he’s not throwing the ball where he wants,” Thomson said. “And he knows that.”

When asked for his reaction, Knebel was brief.

“I don’t think there’s anything to say,” he said. “The decision has been made. I’m going to go do my job.”

Thomson indicated that the Phillies will use a closer-by-committee approach for the time being, with Seranthony Dominiguez as the likely recipient of most save opportunities.

Marlins: Cabrera is dealing with right elbow tendinitis, and Sulser has a right lat strain. RHP Jimmy Yacabonis also was promoted from Triple-A Jacksonville. Phillies: RHP Zach Eflin was scheduled to meet with a doctor after experiencing discomfort in his knee Tuesday night. Thomson indicated that Eflin felt better Wednesday morning, but the club wanted him to see the doctor out of extreme caution. Eflin had surgery on that right knee last offseason. 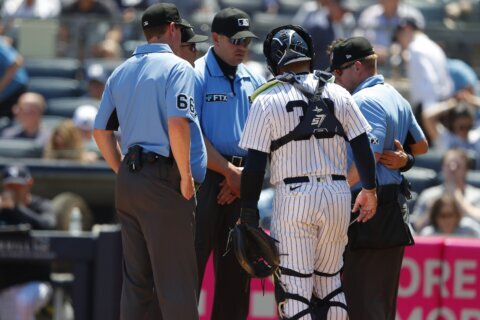 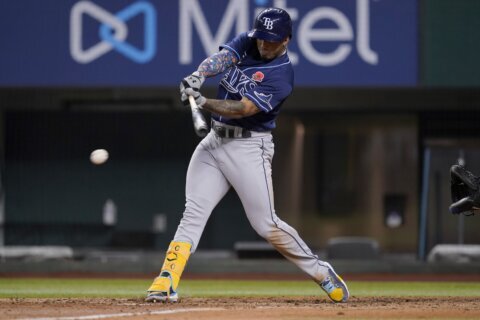