NEW YORK (AP) — The bullpen phone was a secondary concern for Mets starter David Peterson on Monday compared to the one sitting in the trainer’s room.

His cell phone never buzzed, and that was OK by him. Peterson will worry about his wife’s delivery another day.

Peterson pitched into the sixth inning with wife Alex expected to go into labor soon, and New York beat the Miami Marlins 6-0 despite losing Jeff McNeil to injury.

Mets manager Buck Showalter joked Monday morning that New York was on “baby watch” with Peterson, McNeil and Seth Lugo all awaiting newborns. Lugo was placed on the paternity list before the game.

Peterson was prepared to leave the park if Alex went into labor with the couple’s first child, and the Mets had contingencies if he couldn’t make the start. Peterson had his phone stashed in the trainer’s room, hoping someone would hear if it rang, but he was reasonably confident he had time to pitch before his son arrived.

After being inconsistent with his mechanics this season, Peterson (4-1) was on top of his delivery and covered 5 1/3 innings with a season-high seven strikeouts on 100 pitches. He allowed six hits and two walks as the Mets won the four-game series by finishing their 11th shutout this season, tying the Yankees for the major league lead.

McNeil left in the fourth inning with right hamstring tightness after scoring on a wild pitch. He was sent for an MRI, but Showalter was hopeful it was only a day-to-day issue.

New York’s J.D. Davis was hit on the left hand by a pitch in the eighth, the major league-leading 50th Mets player plunked this season. Davis threw his bat in pain but remained in the game. Davis had surgery in the offseason to repair a torn ligament in his left hand that bothered him throughout 2021.

Davis was sent for X-rays, which initially came back negative.

The Mets dinked and dunked their way to a 4-0 lead against Trevor Rogers (3-6) with two sacrifice flies, Mark Canha’s bases-loaded walk and McNeil’s scurry home.

“There were a lot of good baseball plays today,” Showalter said.

Rogers was charged with three earned runs over five innings with seven strikeouts.

Canha’s RBI free pass came in the first inning, when New York loaded the bases with the help of an error by third baseman Jon Berti.

The Mets manufactured two more runs in the fourth. Davis tagged up and aggressively took home on Eduardo Escobar’s shallow fly to left, then McNeil took home on a wild pitch that skipped about 10 feet away from catcher Jacob Stallings.

“I was really proud of the way we played baseball today,” Showalter said. “Cashed in on the opportunities we had.”

McNeil had reached with a hit against the shift — the left-handed hitter entered the game hitting .380 when teams stacked three infielders on the right side of second base.

McNeil walked off uneasily after scoring and went straight to the clubhouse. He was replaced at second base by Luis Guillorme.

Pete Alonso added a sac fly in the fifth that scored Brandon Nimmo, who had three hits.

Peterson allowed a single and a walk with one out in the sixth before being lifted, and he walked off to a standing ovation. Adam Ottavino replaced Peterson with two on in the sixth and got an inning-ending double play from Jerar Encarnación.

Miami left 10 runners on base and was 0 for 10 with men in scoring position.

“I felt like a lot of times we had guys out there, we thought we had something going and it would either end with a double play or just not able to do anything with their guy,” Marlins manager Don Mattingly said.

Two of those 10 outs came from Encarnación, who hit a grand slam in his major league debut Sunday.

Escobar tacked on a two-run single in the eighth.

Marlins center fielder Bryan De La Cruz drew applause and laughs in the fifth inning after three balloons fell out of the seats and into the outfield. After fetching the third balloon, De La Cruz feigned throwing it back into the stands before popping it under his arm.

Mets: RHP Max Scherzer (oblique) will make a rehab start with Double-A Binghamton on Tuesday and could rejoin New York to start Sunday. … 1B/OF Dominic Smith was promoted from Triple-A Syracuse, ending his three-week stint in the minor leagues. 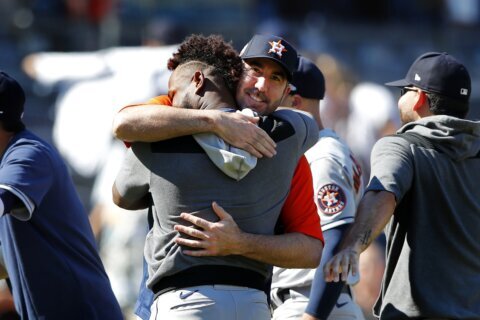 LEADING OFF: After no-hitter, Astros seek series W vs Yanks 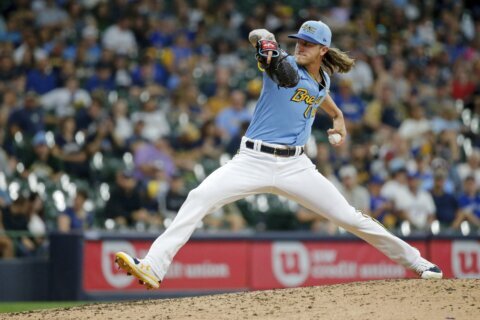 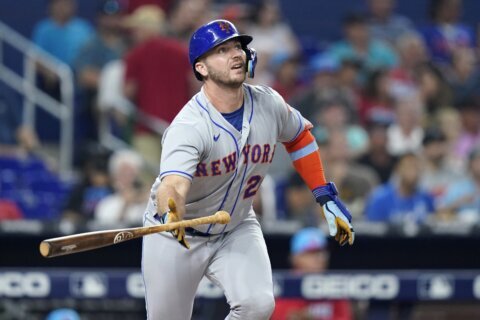