NEW YORK (AP) — The Los Angeles Dodgers opened the season with an all-time high $310.6 million payroll for purposes of the luxury tax and are on track to pay a record tax of nearly $47 million, according to figures compiled by Major League Baseball and obtained by The Associated Press.

Five teams exceeded the $230 million threshold as of opening day, which if unchanged by the season’s end would be one shy of the most, in 2016.

After adding Freddie Freeman and reaching a big one-year deal with Trea Turner, Los Angeles was the only team to exceed the new fourth threshold, the so-called Cohen Tax named after New York Mets owner Steven Cohen. But the Dodgers’ payroll would drop by about $28.1 million if the domestic violence suspension of pitcher Trevor Bauer is upheld by an arbitrator. The Dodgers’ payroll included $34 million for Bauer, the average of his $102 million, three-year contract.

The Mets, in their second season since Cohen bought the team, were second at $289.3 million — $667,278 below the Cohen Tax. That left them on track for a tax payment of just under $22.5 million after adding pitcher Max Scherzer, center fielder Starling Marte, outfielder Mark Canha and All-Star infielder Eduardo Escobar.

San Diego, the only team other than the Dodgers to pay tax last year, began this season $694,982 below the initial $230 million threshold.

Luxury tax payrolls include average annual values of all players on 40-man rosters plus just over $16 million per team for benefits and $1.67 million for each club’s share of the new $50 million pool for pre-arbitration players. Figures also include money owed released players, option buyouts and cash transactions.

Totals change throughout the season as trades and roster moves are made, and the tax is billed based on the final figure in December. For players remaining in salary arbitration, MLB included club offers in its payroll figures.

Under the collective bargaining agreement reached in March following a 99-day lockout, this year’s four tax thresholds are $230 million, $250 million, $270 million and $290 million.

First-time offenders pay 20% on the amount above the first threshold, 32% above the second, 62.5% above the third and 80% above the fourth.

Los Angeles paid tax each season from 2013-17 and its total bill through last year reached $182 million since the luxury tax began in 2003. That’s second only to the Yankees’ $348 million bill.

Until now, the previous high for a luxury tax payroll was the Dodgers’ $297.9 million in 2015, which resulted in a record tax of just under $43.6 million.

A team’s tax rates reset at the lowest level after it drops below the initial threshold in any year.

Also this week, the players’ association issued its 2021 salary study, which showed the average baseball salary dropped 10.2% from 2017 through last season.

The union usually issues its salary report in December but the 2021 edition was delayed while staff was engaged in collective bargaining.

Figures are based on 2021 salaries, earned bonuses and prorated shares of signing bonuses for 1,070 players on 26-man rosters and injured lists as of Aug. 31. MLB, using a slightly different methodology, calculated the average at $3,579,341.

A study by The Associated Press found this year’s opening day average was up 5.9% to $4.4 million, using expanded opening-day rosters and midpoints for players remaining in arbitration. The average declines over the course of a season as veterans are released and replaced by younger players with lower salaries. 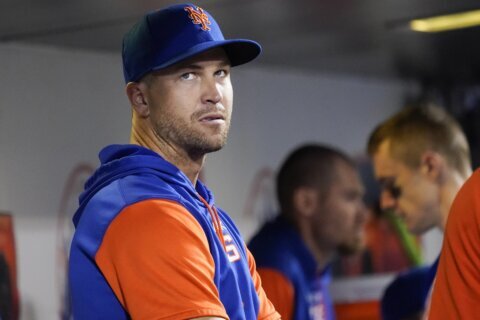