Germán Márquez shook off a shaky start and struck out seven in six innings for his first road win this season. Yonathan Daza and Randal Grichuk each had two hits to help the Rockies end a four-game losing streak.

Blackmon’s home run was the 200th of his career and it came on the 11th anniversary of his debut in the major leagues.

“It was serendipitous for Chuck but we’ve seen him do this before,” Rockies manager Bud Black said. “How ironic. That was a big swing for us. That was a really good swing. Gave us a huge lift.”

Wilmer Flores hit a two-run homer for the Giants. San Francisco has lost four of six.

Joe homered on the fifth pitch from Carlos Rodón but had to wait to circle the bases. Umpires initially ruled Joe’s hit a double and had him stop at second base before replay overturned the call.

The drive extended Joe’s on-base streak to 33 games, the second-longest active streak in the majors and the longest by a Rockies player since DJ LeMahieu’s 38-game run in 2016.

Colorado pulled to 3-2 in the third, had a runner thrown out at the plate in the fourth, then went ahead when Blackmon homered into McCovey Cove. It came after Jose Iglesias and Grichuk singled off Zack Littell (1-2).

“Charlie’s the leader of this team. We know when he’s not starting he’s going to find his way into the game at some point,” Joe said. “For him to come up in that situation is just Charlie Blackmon being Charlie.”

Márquez (2-5) labored through a 34-pitch first inning but recovered and kept the Giants in check for the next five. Márquez, who lost his first three starts away from home, walked four and allowed three runs and four hits.

“For the most part he kept the ball down,” Black said. “The pitch to Flores, he missed his spot. It was in and a little bit down and Flores went down and dug it out and hit the homer.”

Tyler Kinley and Alex Colomé each retired three batters. Daniel Bard pitched the ninth for his 12th save.

Rodón allowed four hits and two runs but left after throwing 98 pitches in four innings. The left-hander struck out five and walked one.

Rockies third baseman Elehuris Montero went 0 for 4 after being recalled from Triple-A Albuquerque before the game.

Giants: SS Brandon Crawford left in the fifth inning because of right quad tightness. … RHP Alex Cobb was placed on the 15-day injured list with a neck strain. OF/1B Darin Ruf returned from the bereavement list. … LHP Sam Long was recalled from Triple-A Sacramento and INF Jason Vosler was optioned down.

Rockies RHP Antonio Senzatela (2-3, 5.40 ERA) faces the Giants for the first time since leaving his start against them on May 16 after two innings with a lower back strain. San Francisco LHP Alex Wood (3-5, 4.66) has lost his last three starts, allowing 10 earned runs over 14 innings during that span. 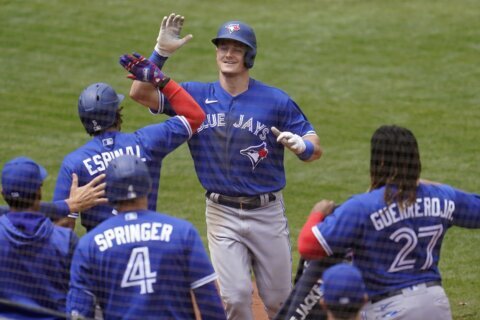 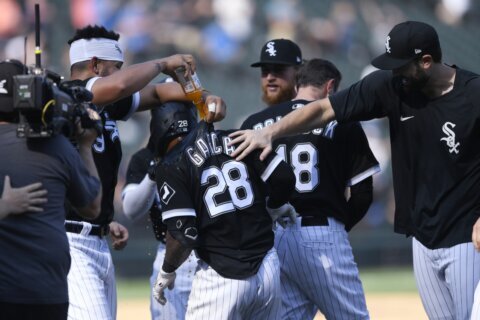