Albies slam leads Braves to 10th in row, 10-4 over Pirates

Dansby Swanson blooped a three-run single, Ozzie Albies added a grand slam in an eight-run seventh inning and the Braves beat the Pittsburgh Pirates 10-4 Saturday for their 10th consecutive win.

Acuña and Austin Riley also homered for the defending World Series champions, on their longest winning streak since they won 14 in a row from July 26 to Aug. 9, 2013. The Braves were 10 1/2 games behind the NL East-leading New York Mets before play on June 2 and closed within 6 1/2 games by Saturday morning.

Atlanta trailed 4-2 before the Braves batted around in the seventh against Duane Underwood Jr. (0-2) and Chris Stratton. Marcell Ozuna doubled, advanced on Adam Duvall’s forceout and scored on Michael Harris II’s single before Swanson’s opposite-field single to right, which charged up the sellout crowd of 41,219 at Truist Park as Acuña scored from first.

“A play like that kind of shocks the defense because they don’t expect it on a ball like that,” Braves manager Brian Snitker said. “I know as soon as that ball was hit, he was in fourth gear.”

Pittsburgh starter Zach Thompson, who had a 2.34 ERA over his prior seven starts, held the Braves to one hit and one walk after surrendering a pair of solo homers in the first. Thompson was charged with three hits and two runs in five innings.

After the Pirates jumped to a 2-0 lead on homers by Bryan Reynolds and Daniel Vogelbach in the first, the Braves tied it when Acuña and Riley went deep in the bottom half. Acuña hit his 25th career leadoff homer.

“I made one mistake, really, to Riley,” Thompson said. “Acuña, you just tip your cap. It was a great piece of hitting, but I guess some reassurance that I was making really good pitches. I just needed to keep going out there and doing my thing.”

Pittsburgh built a 4-2 lead on RBI doubles in the fifth by Reynolds and Ke’Bryan Hayes.

The 38-year-old Morton, who entered with a 6.86 ERA over his last four starts, registered a season-high 12 strikeouts but surrendered five hits and four runs in six innings. The double-digit strikeout game was the 20th of his career and third of the season.

Morton has loved watching his team find different ways to win over the last 11 days.

“I knew it was going to happen,” Morton said. “I knew they were going to do it because I’ve seen it before. I’m looking around the clubhouse those guys are tight and they care about each other. There’s just too much talent and too good a chemistry.”

The Pirates have struck out at least 10 times in five straight games.

Morton faced Pittsburgh, the team he pitched for from 2009-15, for the first time in 303 career starts. The last Braves pitcher to face an opponent in the regular season for the first time this late in his career was John Smoltz against Cleveland in 2007. It was Smoltz’s 443rd game.

Pirates LF Jack Suwinski made a tough catch when he raced toward shallow left and dove forward to rob Ozzie Albies of a hit in the first. … Pittsburgh 2B Tucupita Marcano’s over-the-shoulder catch in shallow center kept Adam Duvall from reaching in the second. … Riley jumped to snare Cal Mitchell’s liner on a difficult play in the eighth.

RHP Kyle Wright (6-3, 2.39 ERA) pitches for Atlanta and LHP José Quintana (1-3, 3.19) goes for the Pirates as the teams wrap up a four-game series. Wright, who will face the Pirates for the first time in his career, has a 1.69 ERA over his last five starts. Quintana is 2-1 with an 8.68 ERA in four career starts against Atlanta. 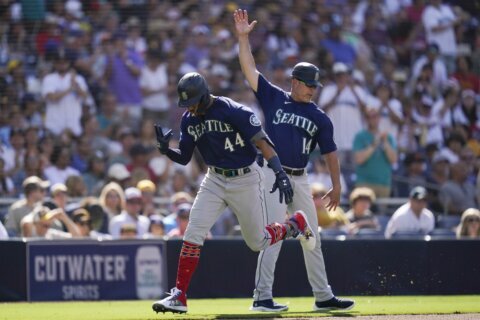 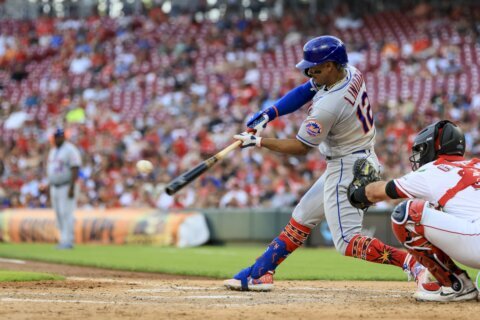