After lengthy skid, Angels will try to defy history

If Mike Trout, Shohei Ohtani and Co. can rebound from that and make the playoffs, it would be unprecedented.

No team has reached the postseason after a losing streak of more than 11 games, according to Sportradar. The Angels played well enough before their skid that they’re still in the thick of the playoff race now. Los Angeles fired manager Joe Maddon last week, but with Trout and Ohtani in the fold, a 3 1/2-game deficit in the wild-card race is certainly surmountable.

Three teams lost 11 games in a row and made the postseason anyway. It happened first during one of the most famous pennant races in baseball history. The New York Giants lost 11 straight in April of 1951, but they eventually ran down the Brooklyn Dodgers and advanced to the World Series on Bobby Thomson’s famous home run.

In 1982, the Atlanta Braves started the season with 13 straight wins. That helped them withstand an 11-game skid in August and win the NL West anyway. In 2017, the Los Angeles Dodgers won 104 games. They might have challenged the all-time record for victories if not for an 11-game losing streak that September.

The longest losing streak by an eventual World Series champion was nine games by the 1953 New York Yankees.

The Angels certainly hope the worst is behind them. Ohtani pitched seven innings and hit a two-run homer Thursday night, when they snapped their skid with a win over Boston. Trout hit two homers Saturday night in a victory over the New York Mets.

Milwaukee lost eight in a row before a victory over Washington on Sunday. The Brewers now trail St. Louis by a half-game atop the NL Central.

A total of 34 teams have made the postseason despite losing streaks of eight games or more. Of those teams, 30 did it after the start of divisional play, 22 during the wild-card era, and seven in the last decade after a second wild card was added to each league.

As the standard for making the postseason has become more forgiving, it’s become easier for teams to overcome an awful week or two.

Who is the most recent team to make the postseason despite an eight-game losing streak?

Matt Carpenter homered twice and drove in seven runs Sunday to lead the Yankees to an 18-4 rout of the Chicago Cubs. New York signed Carpenter on May 26, and he became the first Yankees player to hit six homers in his first 10 games.

Tommy Edman’s two-run homer with two outs in the ninth inning gave St. Louis a 5-4 win over Cincinnati on Saturday. The Cardinals trailed 4-1 in the eighth before Tyler O’Neill’s two-run double. In the ninth, Dylan Carlson led off with a walk for St. Louis, but Yadier Molina hit into a double play. Juan Yepez’s single gave Edman his chance.

Cleveland lost eight straight in 2020, yet made the playoffs. That was the season that was shortened to 60 games because of the pandemic, so that skid comprised 13% of the schedule. But Cleveland went 35-25 and easily qualified for that year’s expanded postseason. 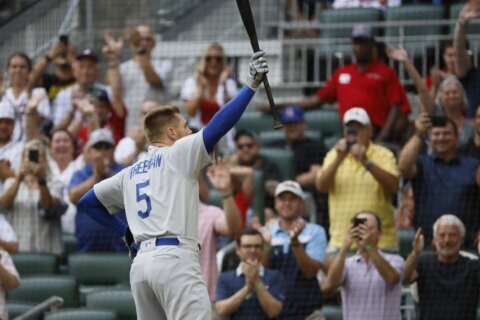