DENVER (AP) — Matt Olson hit a three-run homer, Ronald Acuña Jr. had a solo shot among his four hits and the Atlanta Braves moved above .500 for the first time since the season’s opening week by holding off the Colorado Rockies 8-7 on Sunday.

Ozzie Albies added a two-run single and Adam Duvall doubled and tripled for the Braves (28-27), who completed a four-game sweep and won their season-high fifth straight. They last had a winning record when they were 2-1 on April 9.

“I think everybody in here knows the talent that’s in here and the type of team that we have with everything that was accomplished last year” Olson said of the defending World Series champions. “It feels like we’re starting to get on that roll.”

Ryan Feltner (1-2) allowed six runs and seven hits over three innings in the Rockies’ fourth straight loss. Brendan Rodgers homered, doubled, singled and drove in three. Brian Serven and Charlie Blackmon homered for Colorado, which has dropped 20 of 27 since starting 16-11.

Rockies manager Bud Black said Feltner would stay with the team as the sixth starter with another doubleheader coming this week.

“He’s got to reel it in to be around the strike zone,” Black said. “You can’t just pop one up and miss one by two feet. You can’t do that in the big leagues.”

The Rockies got within 8-7 on Blackmon’s solo homer off Kenley Jansen in the ninth. Pinch-hitter C.J. Cron doubled with two outs, but Sam Hilliard grounded to first and Olson dove to tag the bag just ahead of the runner to give Jansen his 14th save.

“I wasn’t 100% sure if he was going to beat Kenley to the bag, so I thought I had a better chance of getting there myself,” Olson said. “Glad I didn’t take out any knees or anything.”

Olson belted Feltner’s fastball 441 feet to center in the second inning for his seventh homer to put Atlanta up for good at 6-3. The first baseman drove in nine runs on the Braves’ 5-2 trip.

Acuña went deep against Robert Stephenson in the eighth for his sixth career four-hit game.

After the teams headed to extra innings 0-0 and 1-1 the past two days, Sunday resembled a familiar high-altitude game at Coors Field.

The first inning lasted 41 minutes and ended 3-all. Feltner threw 38 pitches and Charlie Morton 41. There were 18 batters, five hits, three walks, a hit batter and an error.

Connor Joe led off the bottom of the inning with a walk to extend his on-base streak to 32 games. It’s the longest for a Colorado player since DJ LeMahieu’s 38-game run in 2016.

Morton (4-3) settled down and allowed four runs and six hits in five innings.

“I was yanking cutters and pulling sinkers below the zone,” Morton said. “But the guys really picked me up.”

Colorado continued to play poor defense. Serven’s throwing error at catcher allowed a run to score in the fifth. Third baseman Ryan McMahon booted a grounder in the eighth for his 11th error to give the Rockies a major league-high 46.

Braves: A trainer checked on Morton for a bit before he stayed in after taking a comebacker off his pitching hand in the third. “It just jammed my thumb, index and middle finger,” he said.

Rockies: OF Kris Bryant, the team’s top free-agent signing before the season, has played in two of the past 40 games due to a sore back. Bryant, who has yet to homer in 17 games, is still not swinging a bat and will need a minor league rehab stint before he returns.

Cron, the team leader with 14 homers, didn’t start for the first time this season.

SON OF A COACH

The Braves claimed INF Kramer Robertson off waivers from St. Louis and optioned him to Triple-A Gwinnett. Robertson is the son of LSU women’s basketball coach Kim Mulkey. OF Eddie Rosario (eye) was moved to the 60-day injured list to open a 40-man roster spot.

The Rockies again wore their green “City Connect” uniforms, a day after debuting the look. They’ll wear them for every Sunday home game the rest of the season.

Braves: Off on Monday after playing 17 straight days. RHP Kyle Wright (5-3, 2.41 ERA) starts at home Tuesday night against Oakland in Olson’s first game against his former team. “It’ll be good to see some old people and catch up,” said Olson, who was traded by the Athletics in March.

Rockies: Struggling RHP German Marquez (1-5, 6.71) starts Tuesday night at San Francisco against LHP Carlos Rodon (4-4, 3.44) to open a six-day, seven-game trip. Colorado ended a 12-game skid against the Giants with a win in their last meeting on May 18. 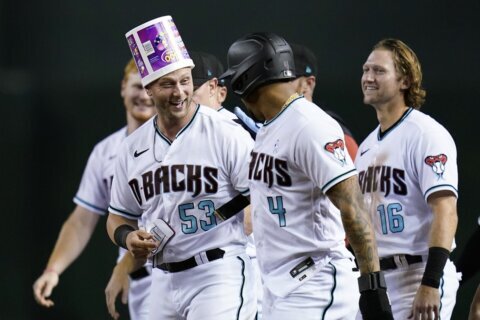 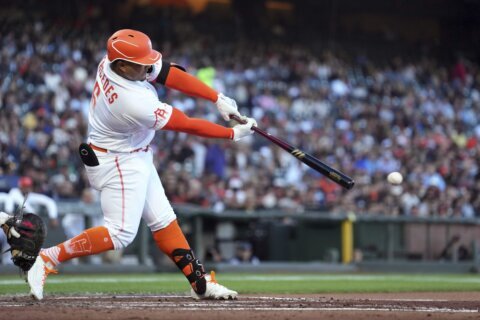 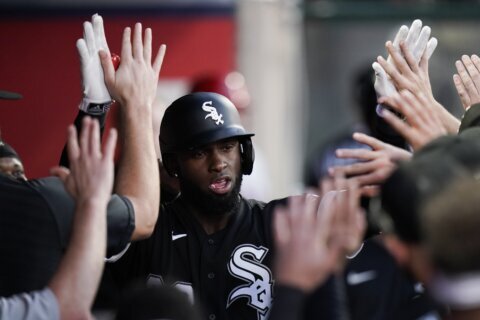