DENVER (AP) — The New York Mets have a turn-the-page-fast mentality for one very good reason: “Nobody cares about the past,” shortstop Francisco Lindor explained. “We’ve got to get it done today.”

Lindor broke a scoreless game with a single in the sixth inning, Taijuan Walker and three relievers combined on a six-hitter and the Mets extended their streak of rebounding from losses by beating the Colorado Rockies 2-0 on Sunday.

The Mets dropped the second game of a doubleheader Saturday, which led to them win their franchise-best 14th straight game following a loss. By taking two of three, New York also captured its 11th series win this season.

“It’s a pretty steady mental team,” Mets manager Buck Showalter said. “They don’t get into that sky’s falling. … They don’t live in that world. I hope it continues.”

It wasn’t a good day at the plate for the Rockies, who were shut out at Coors Field for the first time since Aug. 31, 2020, against San Diego.

Walker (2-0) was a big reason for all those zeroes posted on the scoreboard. He was in complete command over seven stellar innings, scattering five hits and striking out six. Adam Ottavino, Joely Rodríguez and Edwin Díaz finished it off. Díaz got Brian Serven to fly out and pick up save No. 10.

Mainly, his curve, fastball and splitter. Just don’t read into the fact he has a 2.03 ERA at Coors Field over five starts. He doesn’t enjoy pitching here.

“I don’t think anyone does,” he cracked.

The Mets gave Walker all the run support he would need in the sixth. Brandon Nimmo lined a one-out single that got through legs of right fielder Randal Grichuk, allowing Nimmo to motor to third. Lindor lined a run-scoring single to left and, after a soft double by Jeff McNeil, Pete Alonso brought home another run on a groundout.

“That came back to haunt us, for sure,” Rockies manager Bud Black said of the error.

“Today was more about moving the fastball — that was the key to his game today,” Black said.

The Rockies’ struggling offense mustered only six singles off the Mets. They’ve dropped to 19-21 since a sizzling starting.

“We had a couple opportunities late in the game,” Black said. “Couldn’t capitalize.”

Rockies: RHP Peter Lambert (right forearm inflammation) was scheduled to make a rehab start Sunday with Triple-A Albuquerque. … RHP José Ureña threw a bullpen session Saturday in Arizona as the Rockies stretch his pitch count to make him a starter. Colorado brought in Ureña on a minor league deal after he was released by Milwaukee.

Showalter said third base coach Joey Cora needed to leave for family reasons. He wasn’t out there in the ninth.

“We don’t know a lot of particulars,” Showalter said. “He needed to go and he went.”

Versatile infielder Luis Guillorme had two hits as he started at third for the Mets. He also made a sensational stop in the seventh to end the inning. Manager Buck Showalter praised Guillorme’s ability to play all over.

Catching in his future?

“He keeps looking at me with those longing eyes about catching,” Showalter cracked. “It’s not easy to do what he does. It’s hard to find those guys. They’re valuable. He’s a regular irregular.”

The cameras caught Rodríguez relaxing in a chair by the pond beyond the center field wall early in the game. The sunny and mild afternoon was quite a change from two days ago when a snowstorm hit the area.

Mets: Lefty David Peterson (1-0, 1.89 ERA) will start Monday in San Francisco with right-hander Max Scherzer on the injured list due to an oblique strain.

Rockies: Right-hander Chad Kuhl (3-2, 3.86) faces his former team when the Rockies open a three-game series at Pittsburgh on Monday. He was a ninth-round pick of the Pirates in 2013. 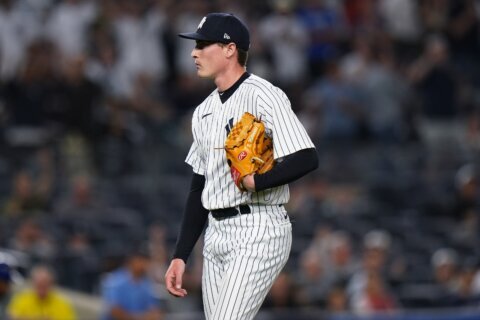