KANSAS CITY, Mo. (AP) — Yadier Molina wasn’t going to let an illness that kept the Cardinals catcher out of the previous day’s lineup also keep him from walking onto the field with Adam Wainwright for the 310th time on Wednesday.

Nor was Molina going to take the rest of the day off after St. Louis jumped out to a big lead.

“He felt terrible (yesterday) and today felt terrible,” Wainwright said of his longtime teammate, who caught him for seven innings of one-hit ball in a 10-0 win over the Kansas City Royals on a cold, damp day at Kauffman Stadium.

“I told him if he just wanted to play five and leave, I’d understand. But he didn’t want to leave me out there.”

Rarely is one ever on the field without the other.

Wainwright and Molina, who went 1 for 5 at the plate, tied the Braves’ Warren Spahn and Del Crandall for the most team wins by starting battery mates with their 202nd together.

Now, Wainwright and Molina need just six more starts to match Spahn and Crandall for second in history behind Mickey Lolich and Bill Freehan of the Tigers.

“The battery mates is awesome,” Wainwright said, “but the winning is the cool part.”

Wainwright (3-3) allowed just a one-out single to Michael Taylor in the third against the weak-hitting Royals, whose only other baserunners against the 40-year-old right-hander came on a fielder’s choice, an error and a walk.

“We’ve just got to be better. I believe we’re better,” Arenado said. “Some guys just aren’t comfortable yet. That will come.”

The final scheduled game between the cross-state rivals this year was moved from a night game to the afternoon because of the threat of rain, though sprinkles still fell on the sparse Kauffman Stadium crowd midway through it.

By that point, the few fans still in their seats were mostly wearing red.

It took a mere 17 pitches from Kris Bubic (0-3) for Tommy Edman and Paul Goldschmidt to work leadoff walks and Arenado to turn on a 2-1 pitch, depositing it 410 feet away in the left-field stands and giving the Cardinals a 3-0 lead.

The three runs were more than they had scored against Kansas City the past two games combined.

“You’re going to give up homers, that’s going to happen,” Royals manager Mike Matheny said, “but free bases in front of them are going to add up.”

Albert Pujols, who brashly proclaimed pregame that “I’m going to do some damage today,” promptly flied out. But the rest of the St. Louis lineup kept on wrecking: Juan Yepez blooped a single to right for his first big league hit, O’Neill drove him in with a triple and Bader provided a sacrifice fly to make it 5-0 before the Royals had a turn to bat.

The final line on Bubic: four runs and two hits and two walks while retiring a single batter.

“I told Nolan if they want to score five runs for me the first inning the rest of the year, that’s fine,” Wainwright said. “I’m good with that plan.”

Yepez, who was recalled from Triple-A Memphis to replace ailing INF Edmundo Sosa a day earlier, got the start in RF in his big league debut. He finished 2 for 3 with a pair of bloop doubles down the right-field line.

Royals C MJ Melendez got his first start behind the plate Wednesday. Last year’s minor league home run champ went 1 for 3 after also getting a hit as the DH in his big league debut Tuesday night.

Cardinals: No new COVID-19 cases were reported after Sosa and four staff members tested positive and were sent back to St. Louis for quarantine. The Cardinals are taking RHP Jake Walsh and C Ali Sanchez from the taxi squad on their upcoming trip in case more positives occur. “I’ll clean the toilets if I need to. I just want to stay,” Walsh said.

Royals: 1B Carlos Santana was placed on the injured list with right ankle bursitis and INF Emmanuel Rivera was recalled from Triple-A Omaha. Santana was hitting just .159 with a homer and six RBIs.

Cardinals RHP Miles Mikolas (1-1, 1.52 ERA) starts the opener of a four-game series in San Francisco on Thursday night. The Royals have the night off before RHP Carlos Hernandez (0-1, 6.00) opens a three-game set in Baltimore on Friday. 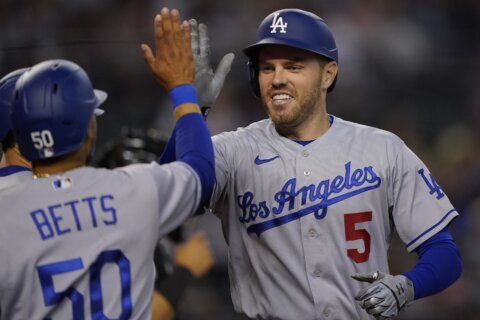 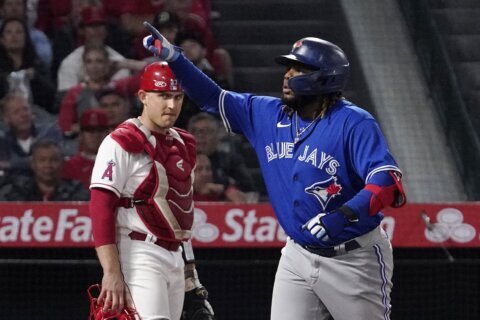 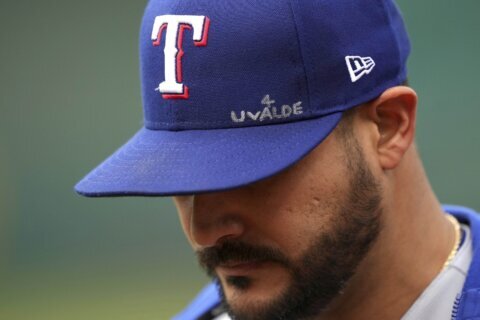