CLEVELAND (AP) — There seems to be cloud hanging over the Cleveland Guardians, and it keeps opening up on them.…
Listen now to WTOP News WTOP.com | Alexa | Google Home | WTOP App | 103.5 FM

CLEVELAND (AP) — There seems to be cloud hanging over the Cleveland Guardians, and it keeps opening up on them.

For the sixth time this season, the Guardians were postponed at home by bad weather as the threat of thunderstorms and an ominous forecast led to their game Saturday against the Detroit Tigers being called more than three hours before the first pitch.

The Tigers were taking infield practice when the game was called at 2:45 p.m. The game was scheduled to start at 6:10.

Told it was the the Guardians sixth washout at Progressive Field in 2022, president of baseball operations Chris Antonetti considered what could be coming.

The latest rainout will be made up on July 14, a previously mutual off day for the AL Central rivals before they played a three-game series in Cleveland.

The Guardians will push back their rotation on Sunday with Shane Bieber (1-2) starting the scheduled 1:40 p.m. start. Detroit will do the same with Alex Faedo (0-1) taking the mound in what will now be the series finale.

It’s been a start-and-stop first 36 games for the young Guardians, who along with the weather postponements also had a recent game in Chicago called following the team’s second COVID-19 outbreak.

Despite the adversity, Cleveland, which at 26.2 years has a younger roster than the Triple-A average, has been competitive. Antonetti expects that to continue.

“We’re a really young team,” he said, “and we wanted to see two things: One, that this group continues to grow and develop together, but also find a way to have that development transition into winning games.

“And although it’s early, we’ve seen this group come out and play competitive baseball and we actually think our best baseball is still in front of us. Hopefully, it plays out that way.”

Guardians manager Terry Francona was set to run the club after missing Friday’s game to undergo a minor surgical procedure. He returned to the team earlier in the week after missing four games with COVID-19.

Cardinals place Flaherty and Bader on the injured list 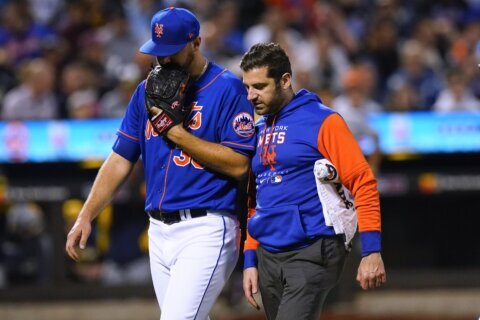