ST. PETERSBURG, Fla. (AP) — Taylor Walls and Ji-Man Choi homered for Tampa Bay’s only hits, and the Rays scored two runs in the seventh inning on four walks and a hit batter in a 4-2 win over the New York Yankees on Sunday that gained a four-game split.

Walls, in a 1 for 34 slide, homered on a 3-1 fastball from Luis Severino (3-1) for a 2-1 lead in the fifth and then made an outstanding defensive play at second to end the eighth inning. With a runner on third, Walls ranged to the shortstop side of the base, diving to grab Aaron Hicks’ grounder. Walls popped to his feet and threw out Hicks by a step at first.

“If we don’t make those plays it could be a different ballgame,” said Walls, who also started an inning-ending double play from third base on Isiah Kiner-Falefa’s grounder in the sixth. “The momentum goes to their side, not ours.”

Walls had said Thursday night that the Yankees were “beatable” and the Rays weren’t going away.

“There was no shade thrown at them when I said that. I think that comment got blown way out of proportion,” he said. “All I meant is that the Tampa Bay Rays can play and beat any team in this league. I don’t speak for just this team, I think everybody around the league knows that as well. Any day of the week, any team can be beat, so that’s all I meant by that comment.”

Gleyber Torres had three hits, including a second-inning home run against Shane McClanahan (5-2). Torres’ ninth home run of the season matched in 161 plate appearances his total in 516 last season.

Severino was forced to switch from a gray glove to a brown model by umpires before his first pitch. He walked his first two batters of the seventh, Wander Franco and Choi, then struck out Manuel Margot and was replaced by Ron Marinaccio.

Marinaccio walked Walls and pinch-hitter Harold Ramirez on five pitches each, forcing in a run. Marinaccio then hit Mike Zunino on the back, just below the left shoulder, with a first-pitch slider, giving the Rays a 4-1 lead.

“You’ve got to make ’em beat you, and today we didn’t do that,” said Yankees manager Aaron Boone.

Aaron Judge hit his major league-leading 18th home run, a drive off Colin Poche in the eighth. Judge was the designated hitter after three straight days on the outfield in the artificial turf.

J.P. Feyereisen pitched a perfect ninth for his first save this season in two chances.

New York, finishing a stretch of 23 games in 22 days, went 0 for 9 with runners in scoring position and is hitting .198 in its last nine games, scoring two runs or fewer in six of them.

“Obviously they can pitch,” Boone said. “Yesterday we got shut down. Today I thought we were very competitive against McClanahan. We just couldn’t get that hit or that gapper or something that turned it into a good offensive day.”

Choi’s homer, his fourth of the year, was an opposite-field drive to left that dropped into the first row.

“Right now the ball feels a lot different from last year. It doesn’t go as far as it used to,” Choi said through a translator.

Severino allowed four runs, starting on seven days rest and getting 22 swings and misses, tied for the second-most in his big league career. He closed off the position of his glove during his delivery after the second inning in what appeared to be an effort not to tip pitches.

McClanahan got his first career win in four starts against the Yankees. allowing seven hits in six innings with seven strikeouts and no walks. He has given up one run over 26 innings in his last four starts.

“A lot of great plays behind me, first of all,” he said. “Taylor Walls, what a day that guy had!”

Tampa Bay wore blue jerseys, a day after the first of five home games this season in which the Rays are wearing throwback Devil Rays jerseys.

C Rob Brantly refused an outright assigned to Triple-A Scranton/Wilkes-Barre and elected to become a free agent, then agreed to a minor league contract and was assigned to the RailRiders.

Yankees: Torres, who has four home runs in his last six games, has been getting daily treatment for a sore right wrist.

Yankees: After New York’s first scheduled day off since May 5, LHP Jordan Montgomery (0-1, 2.30) will pitch Tuesday night’s opener of a four-game series against the Los Angeles Angels. RHP Noah Syndergaard (4-2, 3.08) starts for the Angels in his first game in New York since leaving the Mets. Shohei Ohtani likely will start Thursday’s series finale for the Angels. 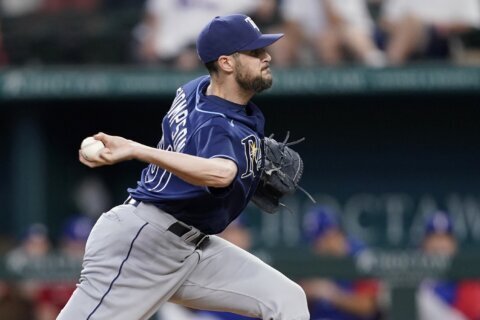 Dodgers host the Padres in first of 4-game series