PHILADELPHIA (AP) — Bryce Harper did not start for the Philadelphia Phillies in Tuesday’s game against San Diego and the reigning NL MVP could miss at least one more game as he recovers from a platelet-rich plasma injection in his right elbow.

Harper had the injection Sunday because of a small tear in the ulnar collateral ligament of his right elbow that forced the slugging right fielder to play only as Philadelphia’s designated hitter. Harper has lingering soreness and hoped he could return for Wednesday or Thursday’s game against the Padres. Harper will remain as DH whenever he returns. Of his 34 games, he’s played in his usual right field spot just eight times.

Harper said before Tuesday’s game he didn’t think he would feel “an improvement for about seven to 10 days or so.”

He won NL player of the week honors for batting .609 (14-for-23) with three homers, six doubles, eight RBIs and a 1.904 OPS in six games. Harper missed Sunday’s game against the Dodgers.

“I think the biggest thing is, I can hit, as of right now,” Harper said. “We’re going to take our time with it. Make sure it heals properly, and hopefully takes. I think we’re a little bit aways from being where I can be out there playing right field, throwing a baseball the right way. The way that I want to. It helps that I can hit and we’ll stick with that for now.”

The Phillies returned home Tuesday from a 5-2 road trip against Seattle and the Dodgers.

Phillies manager Joe Girardi said Harper has a “number of weeks” of no throwing ahead of him. 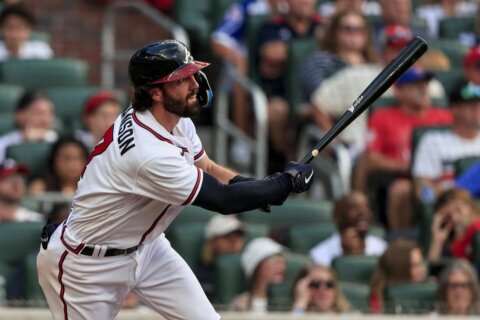 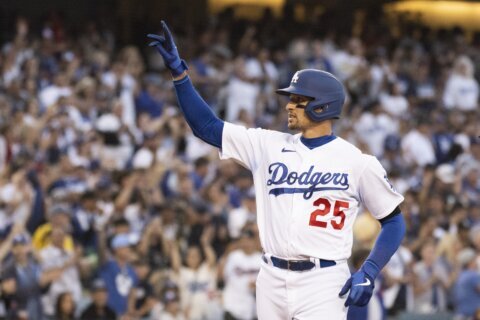