It was only a matter of time before baseball’s next no-hitter, and the way it unfolded was somewhat appropriate. The…
Listen now to WTOP News WTOP.com | Alexa | Google Home | WTOP App | 103.5 FM

It was only a matter of time before baseball’s next no-hitter, and the way it unfolded was somewhat appropriate.

The New York Mets — one of the game’s biggest April success stories this year — blanked Philadelphia on Friday night. And it wasn’t a sterling performance by Max Scherzer or Jacob deGrom, but rather a team effort that required five pitchers and 159 pitches.

That’s baseball in 2022 so far. Offense is down, so the conditions are ripe for no-hitters, but teams have been careful with starting pitchers in the aftermath of the lockout.

In the very first series of the season, San Diego pulled Yu Darvish after six no-hit innings and then did the same when Sean Manaea went seven hitless innings the following game. Clayton Kershaw had a perfect game through seven against Minnesota, but also came out.

The Mets didn’t have a particularly difficult decision with their starter. Tylor Megill walked three in five innings and threw 88 pitches before he was taken out. Drew Smith, Joely Rodríguez and Seth Lugo kept the no-hitter going, and then Edwin Díaz struck out Bryce Harper, Nick Castellanos and J.T. Realmuto in order to finish it.

Of those five pitchers, Díaz is the biggest name, although Megill (4-0, 1.93 ERA) is a big reason the Mets are out to a three-game lead in the NL East despite deGrom’s absence because of shoulder concerns.

At this point in the season, there have been as many combined no-hitters (one) as complete games. Walker Buehler is the only starter to go the distance so far, throwing a three-hit shutout Monday night at Arizona.

But that doesn’t mean the solo no-hitter is about to become an endangered species. Last year, there were nine no-hitters, and in seven of them, the starter went the whole way.

One team that isn’t benefitting from this subdued offensive environment is the Cincinnati Reds, who at 3-19 are already 11 1/2 games out of first place in the NL Central. The Reds have a team ERA of 6.15, over a run worse than any other staff.

Joey Votto, after a resurgence in 2021, is batting .122 with no home runs through his first 90 plate appearances.

The two worst teams in baseball, based on run differential, are in the NL Central, but even the Pittsburgh Pirates are a full six games ahead of Cincinnati in the standings.

Who is the last pitcher to reach double-digit complete games in a season?

Toronto trailed Boston 5-2 in the bottom of the ninth inning Tuesday night before rallying to tie it on a two-out, two-run homer by George Springer. Raimel Tapia hit a sacrifice fly in the 10th to give the Blue Jays a 6-5 win. According to Statcast, the Red Sox had a win probability of 96.9% in the top of the ninth, when they had a three-run lead and a man on first.

It’s been an ugly start for Boston this season in a tough AL East. A loss at Baltimore on Sunday dropped the Red Sox to 9-14, just a half-game ahead of the last-place Orioles and 7 1/2 behind the division-leading Yankees.

James Shields, who had 11 in 2011. Ironically, Shields did it while pitching for Tampa Bay, the team that’s made the “opener” so fashionable in recent years. Ryan Yarbrough’s complete game last year is the only one thrown by a Rays pitcher since the start of the 2017 season. 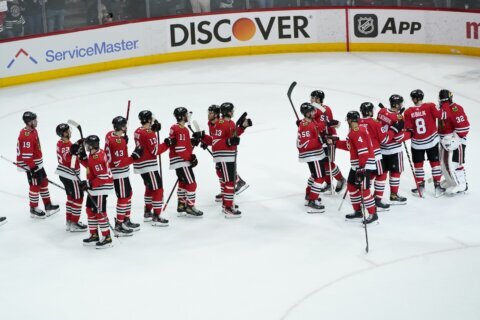 Love of hockey sends Greenberg from Cubs to Blackhawks