A look at what’s happening around the majors today: ___ ON GUARD The Cleveland Guardians are dealing with a COVID-19…
Listen now to WTOP News WTOP.com | Alexa | Google Home | WTOP App | 103.5 FM

The Cleveland Guardians are dealing with a COVID-19 outbreak that has sidelined manager Terry Francona and several of the team’s coaches, prompting the first coronavirus-related postponement in Major League Baseball this season.

Cleveland’s game Wednesday in Chicago against the White Sox was scrapped to allow for more testing and contact tracing. After a day off, the Guardians are scheduled to play Friday night in Minnesota.

At this point, it’s unclear who will manage the Guardians for the series opener at Target Field. Bench coach DeMarlo Hale, who was slotted to fill in for Francona, also tested positive, and Cleveland has other coaches and support staff members infected with the virus.

First-base coach Sandy Alomar could be an option to manage. He took over those duties during the pandemic-shortened 2020 season after Francona was forced to step away after just 14 games due to a health issue. It’s likely the Guardians also will bring up several minor league coaches and field coordinators for the series.

The Guardians recently had a coronavirus outbreak, with infielders Owen Miller, Yu Chang and pitchers Cal Quantrill and Anthony Castro all being placed on the COVID-19 injured list. All have returned except Chang, who is in the minors.

After losing his first three starts this season, Phillies right-hander Zack Wheeler (1-3, 4.10 ERA) has thrown 13 2/3 shutout innings with 14 strikeouts over his last two outings. Wheeler, runner-up for the NL Cy Young Award last year, is expected to come off the COVID-19 injured list and start on seven days’ rest at Dodger Stadium as Los Angeles begins an eight-game homestand.

Philadelphia first baseman Rhys Hoskins has homered in three consecutive games, including a grand slam Wednesday in a 4-2 victory at Seattle. Hoskins’ previous seven homers dating to last season had all been solo shots.

With the best record in baseball at 22-8, the New York Yankees take their show on the road when they open a four-game series against the Chicago White Sox in a matchup of 2021 AL playoff teams.

Rookie right-hander Luis Gil gets called up from the minors to start for New York. The 23-year-old Gil is 0-3 with a 9.53 ERA in five starts at Triple-A Scranton/Wilkes-Barre after going 1-1 with a 3.07 ERA in six big league starts for the Yankees last season, with 38 strikeouts in 29 1/3 innings. New York needs a spot starter after two rainouts last weekend forced a doubleheader Sunday against Texas and a makeup game Monday.

The rolling Yankees have won seven straight series and 15 of their past 17 games. They’re off to their best 30-game start since 2003.

FINISH WHAT THEY STARTED

Houston and Minnesota pick up where they left off after their game Wednesday night was suspended. A severe thunderstorm halted play in the top of the fourth inning with the Astros leading the Twins 5-1 on Jeremy Peña’s three RBIs and Jose Altuve’s home run.

The teams will play the remainder of that one before staging the series finale at Target Field about a half-hour after the first game concludes.

Minnesota right-hander Josh Winder (2-0, 1.61 ERA) is set to pitch the regularly scheduled day game and will aim for his third win in three big league starts.

The 25-year-old rookie has 15 strikeouts, tied for most in a pitcher’s first two starts in Twins/Senators franchise history. In 12 innings over his first two turns, Winder allowed no earned runs and just five hits with one walk.

Winder, a seventh-round draft pick in 2018, began the season in the bullpen and threw three times in relief while the Twins started with a six-man rotation. Injuries to Sonny Gray, Bailey Ober and now Chris Paddack have thrust Winder into a starting role, and he’s pitched as though he’s not going to relinquish it.

WHEN AN OUT’S NOT AN OUT

Mets manager Buck Showalter has an issue with a subtlety of the rule that says a relief pitcher must finish an inning or face three batters.

In Tuesday night’s 4-2 win over the Washington Nationals, Showalter lifted starter Carlos Carrasco for reliever Drew Smith with two outs in the seventh inning and Dee Strange-Gordon on first after a bunt single.

The Mets threw out Strange-Gordon trying to steal second, ending the inning with a 2-2 count on the only batter Smith faced, Riley Adams.

Showalter could have pulled Smith because he finished the inning. Instead, he left Smith in the game — but Smith was required to face three batters in the eighth.

“I was talking to somebody in the league office about that. Why should the defense get punished for making a good play on the offense? You throw the guy out but now you’ve got to face three more batters. You really ought to only face two,” Showalter said Tuesday. “I got a, ‘You know that’s a good point, Buck, we’ll take it up at the end of the year.’” 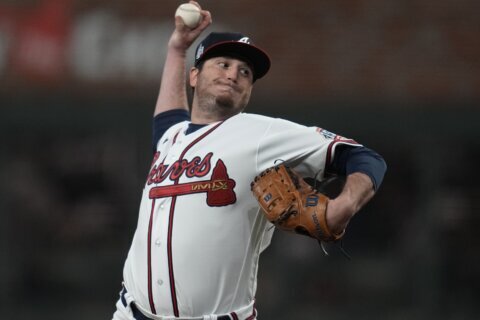 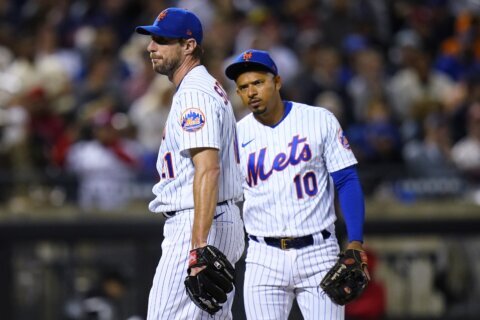