The Twins avoided a daunting injury when it was determined star shortstop Carlos Correa’s right middle finger is not broken as was initially feared after he was hit by a pitch Thursday.

Correa will be evaluated day to day, and he won’t have to go on the injured list.

For now, top prospect Royce Lewis will replace Correa. Lewis was recalled from Triple-A St. Paul to make his major league debut at home against Oakland, filling the roster spot of infielder Luis Arraez, who was put on the COVID-19 list.

After a slow start at the plate in his first season with Minnesota, Correa was hitting .412 (14 for 34) with eight RBIs in his last eight games for the AL Central leaders.

Correa signed a three-year, $105.3 million contract with the Twins that comes with an opt-out clause after this season and next. He has provided instant leadership and a steady presence at shortstop where he won the 2021 AL Gold Glove Award.

A day after six games were rained out, the weather could still cause scheduling problems in some places this weekend.

The Royals-Orioles in Baltimore and Rangers-Yankees in New York were called off and set to be made up Sunday as part of doubleheaders. But rain is the forecast for both places Saturday and could make it tough to play the entire series.

The Blue Jays-Guardians in Cleveland and Dodgers-Cubs at Wrigley Field are scheduled for split doubleheaders Saturday. It’s supposed to be clear and chilly in those cities for the twinbills. This will be the third doubleheader of the season for José Ramírez and the Guardians at Progressive Field.

There’s no rush to make up the Mets-Phillies in Philadelphia because they play each other plenty. They’ll catch up with a doubleheader in August at Citizens Bank Park.

NL Central rivals Pittsburgh and Cincinnati were postponed at Great American Ball Park and will make up the game in July.

Blue Jays newcomer Kevin Gausman tries to keep a zero in two key categories when he pitches at Cleveland in the first game of a doubleheader.

White Sox right-hander Dylan Cease (3-1, 2.48 ERA) looks to follow up his splendid start earlier this week when he pitches at Fenway Park.

Cease struck out 11 while allowing only one hit in seven shutout innings in his last start Monday against the Angels. 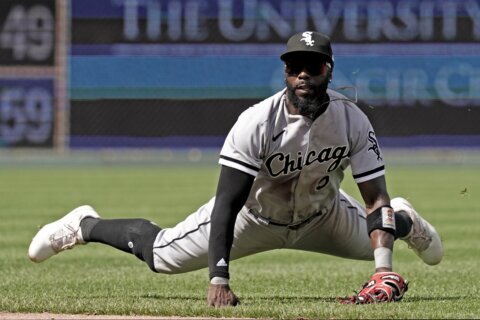