Cortes (4-1) won his third straight start, striking out five and walking one in eight-plus innings. The 27-year-old left-hander lowered his ERA to 1.70, retiring 14 in a row during one stretch. He threw a career-high 109 pitches.

Cortes came within three outs of pitching the Yankees’ first complete game this season and only the fourth complete game by an American League pitcher.

“When I went out there for the ninth and all those guys were cheering, I had goosebumps,” Cortes said. “When he came out there, I told him I’ve got more in me. He told me ‘I know you do, but we’re not in a position to go that deep. We want you to keep pitching for the rest of the season.’”

Cortes has allowed three earned runs or fewer in 18 consecutive starts, two shy of the team record set by Russ Ford in 1910.

“Frankly, once we got the seven-run lead, I didn’t want him to go up to 120 pitches or something like that,” Boone said. “So after the first batter, I just didn’t want to mess around with it.”

New York, dealing with a string of injuries, signed Carpenter to a $1 million, one-year deal before the game and inserted him into the starting lineup when Aaron Hicks was scratched because of right hamstring tightness. The 36-year-old Carpenter, released last week from Texas’ minor league system, went 0 for 2 with a pair of groundouts and also walked.

Carpenter had to shave off his beard to comply with Yankees rules on facial hair but kept a mustache.

“My kids didn’t recognize me when I walked out of the bathroom,” he said. “I got a 6- and 5-year-old at home. They’ve never seen me without a beard.”

Carpenter left a mustache — Cortes also has one.

“First time on the on-deck circle, some of the people in the stands thought that he was taking the at-bat, thought I was him,” Carpenter said.

Aaron Judge had pair of RBIs to raise his total to 36.

The Yankees opened a 5 1/2-game lead over the Rays by winning the opener of a four-game series, the first of 10 games between the teams in a 28-day span. New York won its third straight following a season-worst three-game losing streak and improved the major leagues’ best record to 32-13, matching 1994 for the Yankees’ second-best 45-game start behind 35-10 in 1998.

Ryan Yarbrough (0-1) held the Yankees hitless through five innings before hitting Carpenter leading off the sixth.

“It’s not like we were banging it all over the yards, but we grinded and battled and did a lot of little things to put a pretty big number up there in the end,” Boone said.

Miguel Andújar hit a hard grounder off the glove of shortstop Tyler Walls, who recovered and made a one-hop throw to that bounced off the glove of first baseman Harold Ramírez. Andújar was credited with an RBI and another run scored on the error.

“That’s’ a team where you can’t make mistakes like that,” Walls said. “Any little thing they capitalize on, especially with the guy they had on he mound tonight, it’s going to be tough to battle back and get runs. So we’ve got to make those plays.”

Ralph Garza Jr. added a run-scoring wild pitch in the seventh. Judge hit a sacrifice fly in the eighth and Anthony Rizzo followed with an RBI double off Brooks Raley, with a second run scoring on an error by right fielder Vidal Bruján,

Tampa Bay allowed two unearned runs; The Rays had 30 coming in, the second-highest total behind Pittsburgh. Tampa Bay also threw a pair of wild pitches, raising its total to 20.

Yankees: INF D.J. LeMahieu missed his third straight game with left wrist discomfort and said a cortisone shot reduced pain as the day went on. … Hicks started feeling tightness Wednesday. He thinks he will be able to play Friday. … 3B Josh Donaldson tested negative for COVID-19 and could rejoin the team during the series.

RHP Jameson Taillon (4-1, 2.95) is to start Friday for the Yankees and LHP Jeffrey Springs (2-1, 1.32) for the Rays, Springs won for the first time as a major league starter Saturday at Baltimore. Taillon has allowed two earned runs or fewer in seven of his eight starts. 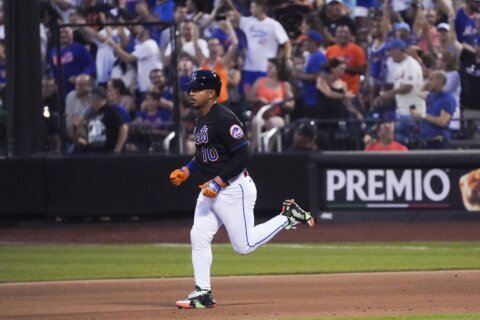 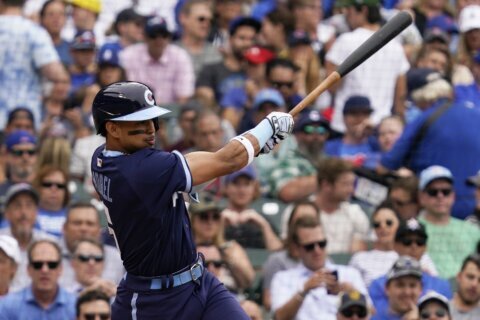 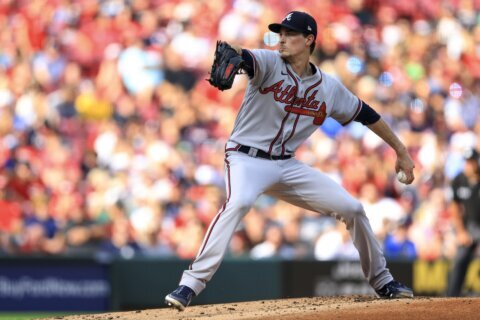