Rodón allowed one run in seven innings and Bart hit a two-run homer in the eighth to lead the San Francisco Giants to a 4-1 victory Friday at Progressive Field.

Rodón (1-0) struck out nine, and gave up two hits and a pair of walks as the Giants won their third straight. Brandon Crawford and Joc Pederson added solo homers, and Camilo Doval pitched the ninth for his second save.

“They were swinging early and were really aggressive, so I just went out there and attacked,” said Rodón, who no-hit Cleveland last season with the White Sox. “They had some good fights, but when I’m working off my fastball, everything else seems to fall in line.”

“I’m proud that we have Cleveland on the front, that’s what’s really meaningful,” manager Terry Francona said. “We’re just trying to be respectful. People aren’t real big on change sometimes, but if you ask some people of color, status quo isn’t always so good.”

The Guardians pulled within 2-1 in the seventh on Owen Miller’s sacrifice fly that scored José Ramírez, but Ramírez committed a throwing error in the eighth that led to two unearned runs on Bart’s homer off Anthony Castro.

Ramírez doubled in the ninth for his 1,000th hit and Miller doubled in the second for his eighth extra-base hit in five starts. Cleveland was limited to three hits and two walks.

“We’ve seen enough of (Rodón),” Francona said. “I’m glad he’s in the National League now because he’s had his way with us.”

Rodón is the first Giants pitcher since 1900 with at least 20 strikeouts and five or fewer hits allowed over his first two starts in a season. He struck out 12 and gave up three hits in five innings against Miami on April 9.

“Carlos has been awesome, but it’s not necessarily fun to play behind him because there hasn’t been a lot of action,” Crawford said. “He keeps that bulldog mentality the whole time.”

Guardians starter Zach Plesac (0-1) worked 5 1/3 innings, allowing Crawford’s shot to right in the second and Pederson’s blast to center in the fifth. Cleveland had won four in a row after starting the season with two losses.

Rookie Steven Kwan, who reached base 19 times and batted .526 in the first six games, was hit on the helmet by a pitch from Rodón in the fourth. He remained in the game and was 0 for 3.

Cleveland’s Josh Naylor went 0 of 3 in his first game since June 27, 2021, when he broke his right ankle and fibula in an outfield collision with Ernie Clement.

Larry Doby Jr., whose father was the first Black player in the American League with Cleveland, was part of the pregame ceremony on Jackie Robinson Day. Robinson broke the color barrier in baseball in 1947, paving the way for Doby later that season.

Ramírez, who would have been eligible for free agency after the 2023 season, signed a seven-year, $141 million contract Thursday. The three-time All-Star has spent his entire 10-year career with Cleveland.

“I think, definitely, it would be a lot better if more players did that,” Ramírez said, adding with a chuckle. “Because in reality, I just want my daughter to use only one (team) jacket.”

Two-time Academy Award winning actor Tom Hanks, who began his career at the Great Lakes Theatre Festival in Cleveland, threw out the ceremonial first pitch to Doby Jr. Hanks, who voiced over the Guardians’ name announcement video on July 23, 2021, had a replica volleyball from the film “Cast Away” on the mound.

Giants: 2B Tommy LaStella (right Achilles inflammation), who has been on the 10-day injured list since April 4, has resumed baseball activities. Manager Gabe Kapler said LaStella is fielding grounders, hitting and running.

Guardians: 1B Yu Chang (illness) was placed on the IL with an undisclosed issue, allowing LHP Konnor Pilkington to be recalled from Triple-A Columbus mere hours after being optioned to the Clippers to make room for Naylor.

Giants: RHP Anthony DeSclafani (0-0, 4.91 ERA) struck out five and allowed two runs over 3 2/3 innings in a no-decision in his first start on April 10 against Miami. 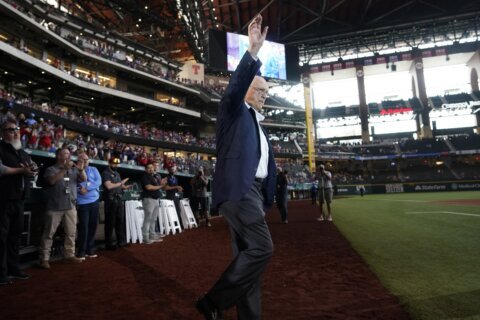 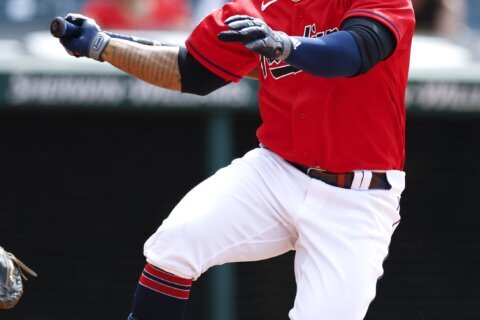