“I know the back end of that bullpen really well,” Haase said. “So, I prepare for those guys and look where we are in the lineup and it came up today.”

Rookie Spencer Torkelson walked with one out and scored on Reyes’ hit.

“Victor doesn’t get that chance if it wasn’t for a couple of hits before that and the walk,” Tigers manager A.J. Hinch said. “A couple of two-out at-bats that really matter, in setting up Victor and then Victor does his part.”

Miguel Cabrera had three of the Tigers’ nine hits, leaving him six shy of 3,000 for his career. All of Detroit’s hits were singles.

“I know a lot of eyes are on me,” Cabrera said. “But at the same time I’m in a good position right now. Hopefully we can win more games. If we win I think the numbers are going to be there.”

Joe Jimenez (1-0) pitched a scoreless sixth, one of four Tigers relievers who combined to allow only one walk among the final 13 Kansas City batters.

Gregory Soto worked the ninth for his second save.

Zack Greinke allowed two runs in 5 1/3 innings for Kansas City and did not strike out a batter for the fourth time in 490 career starts. Detroit scored twice in the second when Greinke’s changeup grazed Torkelson’s leg with the bases loaded and Harold Castro followed with a sacrifice fly.

“Curveball was good and that was about it,” Greinke said. “I’ve got to try to figure some stuff out in between starts and be a little sharper the next time out.”

Michael Taylor and Whit Merrifield had RBI singles in the fourth for Kansas City.

Hunter Dozier had three of the Royals’ seven hits, including a fourth-inning triple.

Tigers: SS Javier Báez was a late scratch after missing Wednesday’s game with right thumb soreness. “He took one round of BP and said it was uncomfortable, so pulled him out of the game,” Hinch said. “I’m not going to play him tomorrow. We’ll see if he can take some inside BP and get him better and maybe aim for Saturday.” 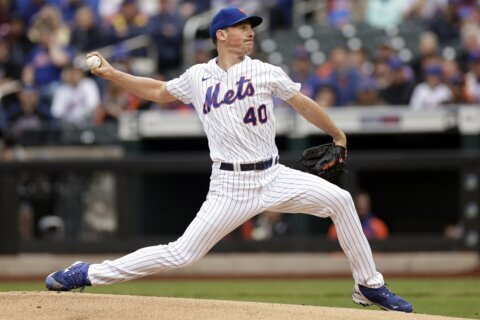