Kim hit a two-run home run in the second inning to pull the Padres into a 2-2 tie. Cronenworth then belted a solo shot in the seventh to finish the scoring.

Kim and Cronenworth both had two hits in helping the Padres to their fourth straight win and ninth in the last 11 games. Trayce Thompson hit a two-run single for San Diego.

Cronenworth is 8 for 24 with two home runs and a triple in his last seven games, lifting his batting average from .160 to .213. He was selected to the All-Star Game last year in his first full season.

“I’ve felt good pretty much all season, but I’ve had some (tough) luck, been hitting a lot of lineouts to center field,” said Cronenworth, who is 8 for 24 with two home runs and a triple in his last seven games, lifting his batting average from .160 to .213. “Now, I’m starting to find some holes and when you get a couple of hits, your confidence just grows.

“I’ve had stretches like this before, but they’ve been in the middle of the season, and you look up at the scoreboard and you’re still hitting .300. It’s tough to look up and see .160.”

Darvish (2-1) allowed three runs and eight hits while striking out five and walking one. He was struck on the right triceps by a line drive off the bat of Ke’Bryan Hayes in the fifth inning but stayed in the game.

“Normally, I wouldn’t have even thought twice about taking him out, but he really wanted to go deeper in the game,” first-year Padres manager Bob Melvin said. “The thing I’m learning about Yu real quickly is that he’s a tough guy.”

Taylor Rogers got the last two outs for his eighth save in nine opportunities after the Pirates put two runners on base in the ninth inning.

Zach Thompson (0-3) had his rough first season with the Pirates continue as he gave up four runs in 3 1/3 innings. Acquired from Miami in an offseason trade for Gold Glove catcher Jacob Stallings, Thompson has a 10.05 ERA in four starts.

The Padres scored two runs in the fifth inning to break a 2-2 tie. Cronenworth’s line-drive single off second base umpire Jeremie Rehak’s lower leg plated the first run and Manny Machado followed with a sacrifice fly.

Vogelbach drew the Pirates within a run in the bottom of the inning with a single.

Trayce Thompson pushed the Padres’ lead to 6-3 in the sixth. He was called up from Triple-A El Paso a day earlier.

“It’s an opportunity you don’t take for granted,” said Thompson, who is playing for his fifth team in a six-year career.

The Pirates opened the scoring in the first inning with run-scoring singles by Vogelbach and Castillo. Kim evened it at 2-2 with his 425-foot homer to the left-field bleachers.

Kim also homered Thursday in a win at Cincinnati and just missed a second one when the ball hit off the top of the left-field wall. He made sure this one easily cleared the fence.

“I ate some good food and lifted weights so that gave me the strength to hit the ball out,” Kim, grinning, said through a translator.

CLOSING IN ON HISTORY

The Pirates have yet to get a win from a starting pitcher through 20 games. The major league record to a begin a season was set by Baltimore in 1989 when the Orioles went 0-21 to start the year.

Slumping Pirates first baseman Yoshi Tsutsugo was out of the lineup for the second straight day. He spent extra time in the batting cages before the game with hitting coach Andy Haines.

Tsutsugo has a .185 batting average and no home runs in 16 games this season.

The Pirates assigned outfielder Anthony Alford outright to Triple-A Indianapolis after he cleared waivers. He was designated for assignment Sunday.

Padres: RHP Mike Clevinger (Tommy John surgery) is expected to make his season debut next week during a two-game series at Cleveland. Clevinger has been out since undergoing surgery following the 2020 season. He spent the first five seasons of his career with Cleveland before being traded to the Padres in 2020. … LHP Blake Snell (strained left groin) threw four scoreless innings for High-A Fort Wayne on Thursday in his first rehab start. The 2018 AL Cy Young winner has yet to pitch for the Padres this season.

Pirates: INF/OF Cole Tucker remained on the COVID-19 injured list but participated in pregame drills and is expected to be activated Saturday. … RHP Max Kranick (right forearm strain) was activated from the 10-day IL and optioned to Indianapolis. … RHP Duane Underwood Jr. (right hamstring strain) began a rehab assignment at Low-A Bradenton … Knapp was in the lineup a day after being a late scratch because of a non-COVID illness.

Padres: LHP Sean Manaea (2-2, 3.47 ERA) will start Saturday night. He was tagged for six runs in 4 1/3 innings in a loss to the Los Angeles Dodgers in his last start after allowing three runs in 19 innings in his first three outings. 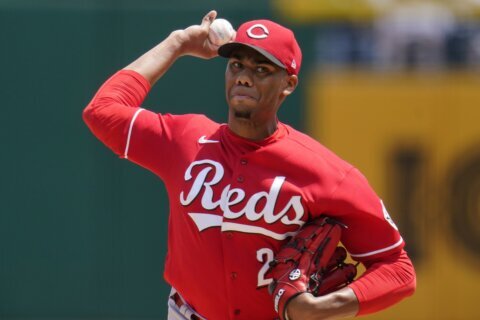