MINNEAPOLIS (AP) — Clayton Kershaw was in prime form — call it perfect — in his season debut for the Los Angeles Dodgers, leaving no concern about his health after facing no resistance from the Minnesota Twins.

When the time came for manager Dave Roberts to relieve him, Kershaw didn’t put up a fight, either.

Kershaw took a perfect game through seven innings for the Dodgers until he was pulled after 80 pitches, dominating the Twins with 13 strikeouts in 21 batters during a 7-0 victory on Wednesday.

“Those are selfish goals. We’re trying to win. That’s really all we’re here for,” Kershaw said.

Roberts consulted with Kershaw after the sixth, and the three-time NL Cy Young Award winner told him his preference: one more inning with an 85-pitch limit.

So on a the gray, windy, 38-degree afternoon at Target Field, Alex Vesia entered for the eighth to boos from the blue-clad Dodgers fans in the crowd of 17,101. Vesia gave up Minnesota’s first and only hit, a one-out single by Gary Sánchez.

Cody Bellinger, Gavin Lux and Austin Barnes hit back-to-back-to-back home runs in the eighth against reliever Dereck Rodriguez, who made his Twins debut.

Chris Paddack had a rough first start with the Twins, too, less than a week after he was acquired in a trade with the Padres. He lasted four innings, with six hits and three runs allowed.

Justin Turner hit a two-run single in the first, Trea Turner had a sacrifice fly in the second and Max Muncy went deep in the ninth for the Dodgers, who won a 7-2 game the night before that was paused for 1 1/2 hours due to rain and ended after midnight.

Re-signed with the Dodgers for $17 million this year after missing more than two months in 2021 with inflammation in his left forearm, Kershaw was slotted fifth in the rotation out of the gate. That unusual assignment was to give his arm more time to build up strength in light of the limited spring training schedule.

“Blame it on the lockout. Blame it on me not picking up a baseball until January,” said Kershaw, who threw a no-hitter against Colorado on June 18, 2014. “My slider was horrible the last two innings. It didn’t have the bite. It was time.”

The breaking ball was awfully good before that, though. Kershaw threw 41 sliders, with 17 swinging strikes, with a fastball that never topped 91 mph. He struck out the side in the sixth and fanned every Twins batter at least once except Gio Urshela, who grounded out to third and flied out to right in his first two at-bats.

“He’s been pitching like that for years. He’s been having a lot of success. So he knows how to do it,” said Urshela, who hit a sharp grounder up the middle with two outs in the seventh that skidded under Kershaw’s glove as he tried to backhand the ball.

Lux, shifted to the shortstop side of second base, made a slick pickup and throw for the inning-ending out.

“Every decision I make is for the best interest of the player, their health and the ballclub, because there’s a lot of people that are cheering for the Dodgers, not only just for today and Clayton to throw a no-hitter, but for the Dodgers to win the World Series,” Roberts said. “For us to do that, we need him healthy.”

Roberts has pulled a starting pitcher with a no-hitter before. Walker Buehler came out after six innings in May 2018, Rich Hill left with a blister after seven perfect innings in September 2016, and Ross Stripling was removed after 7 1/3 innings in April 2016.

“Those guys make it tough on me,” Roberts said.

According to ESPN research, Kershaw and Hill are the only pitchers in major league history to be pulled after seven-plus innings with a perfect game still intact.

Kershaw hugged his catcher Barnes in the dugout after his day was done.

“He said, ‘Sorry,’” Barnes said. I knew it was the right call and stuff like that, but I thought we could get it done. That’s baseball.”

This was Kershaw’s 66th career double-digit strikeout game in 380 regular season appearances. The Twins became the 27th major league team he faced, missing only the Red Sox and Orioles. He did pitch against Boston in the 2018 World Series.

The Twins gave shortstop Carlos Correa a rest and center fielder Byron Buxton a turn at DH, as a reaction to the late night on Tuesday. Buxton struck out all three times he faced Kershaw.

Dodgers: RHP Walker Buehler (1-0, 1.80 ERA) takes the mound for the home opener on Friday at Dodger Stadium against Cincinnati. LHP Reiver Sanmartin (0-1, 19.29 ERA) pitches for the Reds to start the four-game series. 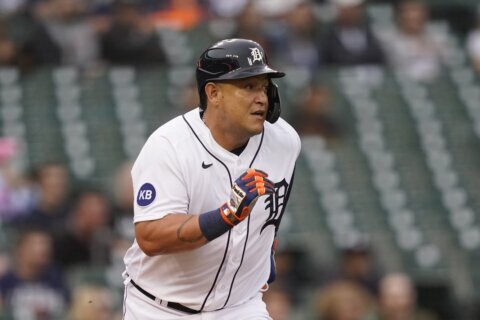 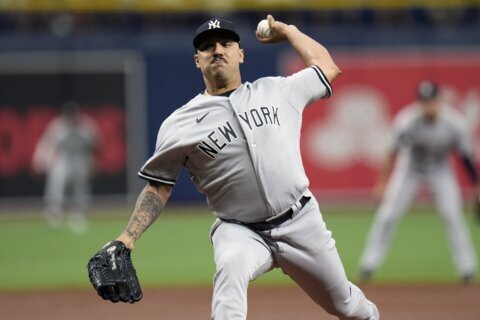