Guerrero shook off a bloody gash on his right ring finger to hit three home runs against the rival Yankees, including two off ace Gerrit Cole.

The AL MVP runner-up homered off Cole in the first inning, had his hand accidentally spiked on a play at first base in the second, then hammered a line-drive homer off Cole in the third to put Toronto up 3-0. He doubled off Cole in the sixth — prompting the pitcher to make a show of tipping his cap to the 23-year-old — then launched a 443-foot leadoff homer against Jonathan Loaisiga in the eighth for a 5-3 lead.

It was the second three-homer game of Guerrero’s career, matching a career high set last April 27 against Washington.

Guerrero seemed like he’d have to leave in the second inning when his bare throwing hand was accidentally spiked by baserunner Aaron Hicks. Guerrero had to reach across his body for infielder Bo Bichette’s throw and placed his right hand down behind the first base bag to balance. Hicks stomped on it running out an infield single.

The 23-year-old Guerrero immediately began waving the hand around, then walked toward Toronto’s dugout as blood dripped onto his uniform and the turf.

In a show of toughness sure to satisfy hockey-mad fans back in Toronto, Guerrero had a trainer tape up his wound and jogged back to first base a couple minutes later.

With a bloody stain on the right thigh of his pants, he batted again in the top of the third and turned Cole’s 98 mph fastball into a 427-foot, two-run homer and a 3-0 Blue Jays lead.

He used his right hand for high-fives with base coaches Mark Budzinski and Luis Rivera as he rounded the bases, then clapped his hands together emphatically before touching home plate.

Guerrero’s first homer was nearly robbed in center by Hicks, who leaped above the wall and briefly had the ball in his glove. It fell out when Hicks hit the wall, bounced off something beyond the home-run barrier and fell back into play. A replay review confirmed the ball went out.

Guerrero has four homers in six games this season after leading the majors with 48 last season. 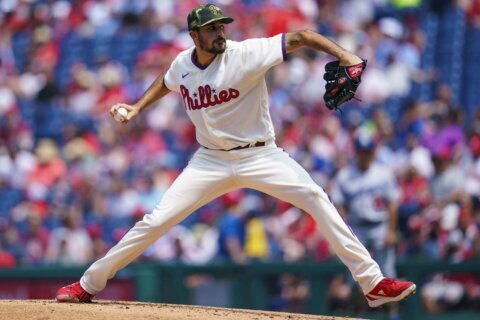 Davis leads Mets against the Giants after 4-hit outing