DeGrom out with shoulder issue, dealing huge blow to Mets

SCOTTSDALE, Ariz. (AP) — The New York Mets will be without one of the sport’s most dominant pitchers to start…
Listen now to WTOP News WTOP.com | Alexa | Google Home | WTOP App | 103.5 FM

SCOTTSDALE, Ariz. (AP) — The New York Mets will be without one of the sport’s most dominant pitchers to start the season.

Jacob deGrom will miss significant time because of inflammation in his shoulder area, a huge blow to a team that heavily invested in making a deep run this season.

New York’s ace won’t throw for up to four weeks and there is no timetable for his return, the team announced Friday. The Mets said an MRI earlier in the day showed a stress reaction on his scapula that caused inflammation.

The two-time Cy Young Award winner had been set to start the season opener Thursday in Washington. The Mets had considered their rotation a major strong suit this season after signing three-time Cy Young winner Max Scherzer and trading for All-Star Chris Bassitt.

“I think the good news is here there is nothing structurally wrong here, as far as the rotator cuff or anything like that is concerned. We are dealing with a bone issue and when you are dealing with bone, they calcify. The healing characteristics will take of themselves, so I think that’s a positive that we walk away with,” Eppler said.

After getting off to a sensational start last year, deGrom didn’t pitch during the second half because of a sprained elbow. He was 7-2 with a 1.08 ERA in 15 outings, but New York collapsed without him to finish 77-85 after leading the NL East for 103 days. His final start was July 7 against Milwaukee.

The right-hander reported to camp healthy this year and had permitted one run over five innings in Grapefruit League games, striking out 10. His most recent outing was Sunday against the Cardinals.

UMPS ON THE MIC

Major League Baseball said that umpires will conduct in-park announcements during replay reviews this season. The decision was delayed two seasons because of the coronavirus pandemic.

Audio will go over ballpark public-address systems and be made available to broadcasters.

MLB was the last major pro sport in North America to institute replay when it began late in the 2008 season for home run calls. Video reviews were vastly expanded for the 2014 season.

Kimbrel was 4-5 with 24 saves in a combined 63 games with the Chicago Cubs and White Sox last season. The Cubs shipped him across town at midseason in exchange for Codi Heuer and Nick Madrigal. Kimbrel was 2-2 with the White Sox with one save in 24 games.

Kimbrel rediscovered the form that made him one of the game’s best closers and was named to his eighth All-Star team last season.

Right-hander Merrill Kelly has agreed to an $18 million, two-year contract with the Arizona Diamondbacks that covers the 2023 and 2024 seasons with a club option for 2025.

White Sox shortstop Tim Anderson will serve a two-game suspension when the season starts next week for making contact with umpire Tim Timmons during the ninth inning of a game on Sept. 27. Anderson will miss games at Detroit on April 8-9. The penalty was reduced from the original three-game suspension. … The Toronto Blue Jays extended manager Charlie Montoyo’s contract through the 2023 season. … Oscar-winning actor Tom Hanks will throw out the ceremonial first pitch before the Guardians’ home opener against the San Francisco Giants on April 15. It will be Cleveland’s first home game since dropping Indians, the team’s name since 1915. 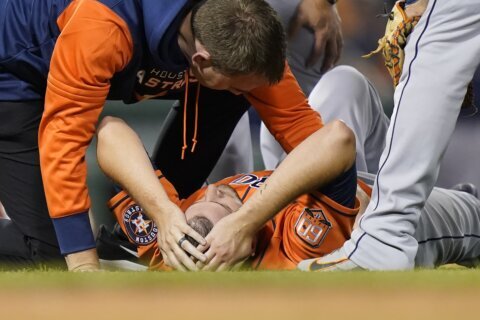 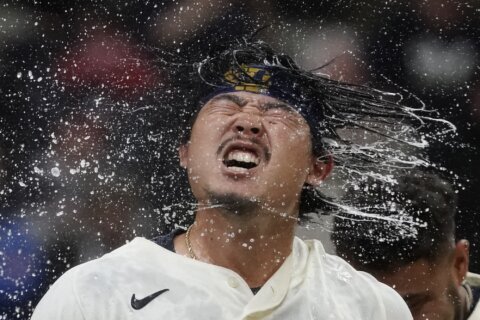 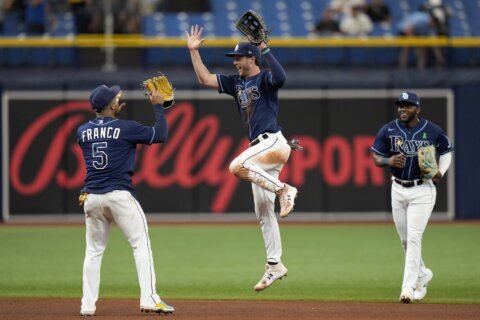