Blackburn (1-0) struck out seven and walked one, helping the rebuilding A’s under new manager Mark Kotsay win their second straight after beginning the season with two losses. Oakland lost two of three at Philadelphia over the weekend.

“We’re just trying to establish our identity,” Kotsay said. “I think they’ve come together as a group in a very short time. These first four games they’ve shown a fight about them I’m real happy about.”

With the Rays trailing 9-1, Tampa Bay manager Kevin Cash sent outfielder Brett Phillips to the mound for the final two innings. Phillips got an inning-ending double-play grounder on a mid-40s mph pitch to Andrus during a five-pitch eighth inning, and made a sliding catch in front of the third-base dugout on Brown’s foul ball before giving up Sheldon Neuse’s first career grand slam with two out in the ninth.

“I’m going to have to call my mom and basically explain to her that I just didn’t have my best stuff tonight,” Phillips said.

Phillips struck out to end the game, which technically made him the third pitcher to be credited with a plate appearance at Tropicana Field, which opened in 1998. The others were position player Wade Boggs on Aug. 10, 1999 and pitcher Andy Sonnanstine on May 17, 2009 due to an error on the lineup card.

“That’s a great part of history to be a part of, especially in my hometown to be able to be a two-way superstar that I am,” Phillips deadpanned.

Wander Franco had his third three-hit game of the season for the Rays, who began the season with a three-game sweep of Baltimore in which they outscored the Orioles 15-4.

Rays starter Luis Patiño (0-1) departed in the first inning with a strained left oblique. He will undergo an MRI exam.

Chris Mazza replaced Patiño with two outs and an 0-2 count on Sean Murphy and hit the catcher in the rear end with his first pitch. Brown then hit his three-run shot and Chad Pinder followed with a solo drive that made it 4-0.

Andrus’s three-run drive in the second off Mazza put Oakland ahead 8-0. He finished with three hits.

Oakland claimed right-hander Gabe Klobosits off waivers from Washington and designated outfielder Luis Barrera for assignment. Klobosits is expected to join to Triple-A Las Vegas. The 26-year-old Barrera made his major league debut with the A’s in 2021 and went 2-for-8 in six games over two stints. He was signed by Oakland out of the Dominican Republic in July 2012.

Rays: Right-hander Ryan Thompson, who hadn’t pitched in the majors since last June 27 and underwent thoracic outlet decompression surgery on Sept. 30, was recalled from Triple-A Durham and worked a scoreless sixth.

“There were a lot of things where we were unsure what it was, and it seems like a million MRIs and a bunch of different opinions,” Thompson said. “That kind of puts you in a place of, are you ever going to pitch again without pain? Are you ever going to get back to the big-league mound? You just never know, so to be here and this opportunity is amazing.”

Left-hander Ryan Yarbrough (left groin tightness) was placed on the 10-day injured list, but hopes to miss just one start.

Oakland right-hander Adam Oller and Rays righty Tommy Romero will both be making their major league debuts in Tuesday night’s game. It’s the 28th time since 1901 that both starters in a game are making their debuts, according to Baseball Reference. 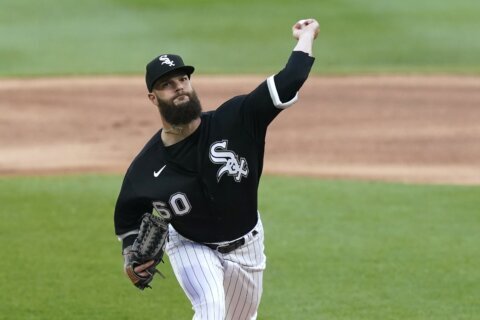