The 37-year-old Vogt, who was a free agent, can earn a $100,000 bonus for spending 60 days on the active major league roster. He batted .195 with seven home runs and 25 RBIs in 78 games between the Arizona Diamondbacks and World Series champion Atlanta Braves last season.

The two-time All-Star became a minor league free agent this winter. He spent from 2013 through part of 2017 with Oakland and also spent the 2019 season in the Bay Area with San Francisco. He lives in Olympia, Washington, and had hoped to stay on the West Coast.

That’s where they “believe in Stephen Vogt!” — a cheer that became popular for his unexpected playoff heroics.

Vogt was a minor league free agent because of a roster necessity by Atlanta during last year’s postseason run to the World Series title. Vogt got injured before the playoffs and had surgery for a sports hernia Oct. 6. The Braves needed his roster spot, so Vogt was designated for assignment, then immediately brought back on a minor league deal that allowed him to still be around the club through the postseason.

This will be his 10th major league season after starting 2021 with Arizona and being traded to Atlanta.

He shared earlier this month in an interview with The Associated Press how he opted to wait through the labor lockout to sign a contract just like his big league brethren even though he had interest from clubs to sign a minor league deal.

Oakland designated the fan favorite for assignment in June 2017. In October 2013, he produced a game-winning hit in the playoffs for a 1-0 win against Justin Verlander and the Tigers that sent the best-of-five AL Division Series back to Detroit tied at 1.

After striking out twice against Verlander, Vogt fouled off seven pitches — including the initial five — in a 10-pitch at-bat that ended the seventh. His next time up, he lined a bases-loaded single into left-center that won the game.

“It’s a crazy feeling,” he said at the time. 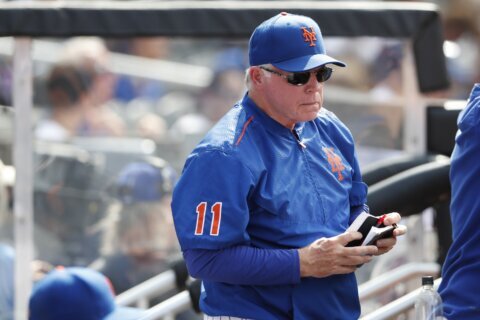