Even in short spring, MLB teams go easy in buildup

SCOTTSDALE, Ariz. (AP) — There may not be many major leaguers on the field when big league spring training games begin Thursday.

The Arizona Diamondbacks are among eight teams that open the exhibition season Thursday — nearly three weeks behind the original schedule — when they play the Colorado Rockies at Salt River Fields. If their approach is a bellwether for other organizations, it’s unlikely the Vladimir Guerrero Jrs, Max Scherzers, Mike Trouts and Clayton Kershaws will be getting at-bats or throwing fastballs over the next few days.

“I’m not going to ask any of the players who got here (Monday) to be ready on the 17th,” D-backs manager Torey Lovullo said this week. “All those players who are going to be playing Game 1 on that field against the Rockies are in minor league camp.”

Lovullo said Monday was the first time he got the chance to really see his big league players perform on the field. The fifth-year manager said he’s been impressed with how his players prepared during the lockout’s uncertainty, and that knowledge will figure into his calculus for when he’ll insert his starters into spring training games.

“We’ll throw that all into the search engine and see when they’ll step back on the field and get back in that arena,” Lovullo said. “But it won’t be Day 1. It won’t be Day 2.”

All 30 teams should have plenty of backup options available for the first few games. Even during the lockout, minor league camp progressed as scheduled, meaning players not on major league 40-man rosters have been working out for weeks.

The big leaguers — even those working out on their own — are trying to catch up.

Yankees manager Aaron Boone said his big league pitchers probably won’t take the mound in a game until Sunday, though position players could get a little work on Friday and Saturday.

“Depends on the guy, kind of listening to their body and where they’re at and what transpired in the game,” Boone said. “I think it’s a couple of at-bats, anywhere in three to five innings initially. Obviously, the calendar’s there, but we want to be smart. But that’s also why it’s fairly important to get these guys going early in games, so that we can kind of gradually build that up while they are here.”

One day after cutting ties with Freddie Freeman, the Braves signed Matt Olson to a $168 million, eight-year contract.

Olson wasn’t eligible for free agency until after the 2023 season, but the defending World Series champions quickly locked down the 27-year-old slugger through at least 2029. The deal also includes a $20 million club option for 2030 with no buyout.

The Braves dealt four top prospects to the Oakland Athletics for Olson, a 2021 All-Star coming off a season in which he had 39 homers and 111 RBIs while batting .271. The move means Freeman — a cornerstone for the franchise for a decade — is likely headed elsewhere.

It was the 10th contract of at least $100 million agreed to since the end of the World Series and the first since Major League Baseball’s 99-day lockout ended last week.

Selected by the Atlanta Braves in the second round of the 2010 amateur draft, Simmons had his best season in 2017 when he hit .278 with 14 home runs, 69 RBIs, 38 doubles and 19 stolen bases. His .981 career fielding percentage ranks third best among active shortstops, and his range at a vital position makes him an analytics favorite.

The 32-year-old Simmons won the most recent of his four Gold Gloves in 2018. He batted just .223 with three homers for Minnesota last year.

Cardinals pitcher Jack Flaherty had an examination of his right shoulder Tuesday, according to the club. St. Louis hopes to find out the cause of his soreness soon. … Toronto’s Yusei Kikuchi threw a 40-pitch bullpen session Tuesday, one day after the left-hander finalized a $36 million, three-year deal. 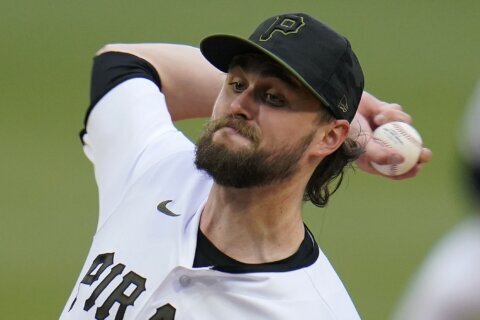