ATLANTA (AP) — Tucker Davidson was in bed Sunday morning when his phone rang with Braves manager Brian Snitker on the line.

Five days after watching the World Series opener from a hotel room about 700 miles from the ballpark, the Atlanta prospect was going to start Game 5.

Davidson’s journey from World Series viewer to pitcher resulted in neither stardom nor shame. He looked like the inexperienced rookie he is, struggling to throw strikes.

A 25-year-old left-hander making his first big league appearance in 4 1/2 months, Davidson allowed four runs and got six outs against the Houston Astros, who roared back from a four-run deficit for a 9-5 win Sunday night that forced Game 6.

“We were going to try to stretch him as far as we could, and I think we did,” Snitker said.

He allowed a pair of unearned runs in the third after shortstop Dansby Swanson let Jose Altuve’s leadoff grounder bounce out of his glove for an error. Davidson walked Michael Brantley and was replaced by Jesse Chavez, who gave up Carlos Correa’s run-scoring double and Yuli Gurriel’s RBI groundout that tied the score 4-all.

Snitker informed Davidson of the starting assignment at about 11:30 a.m., his first major league appearance since June 15 and just the sixth of his career.

Snitker had deliberately delayed divulging the news to Davidson, as he had for Lee a day earlier.

“I know their phones have been blowing up and would be and processing a lot,” the 66-year-old manager said.

About 8 1/2 hours later, Davidson headed to the mound for what he called “a dream of mine for my entire life.”

“Walking out to the bullpen to warm up, I definitely soaked it in,” he said. “People were chanting my name.”

Then he tried to slow down. During his two innings, he repeatedly stepped off and stood on the infield grass for deep breaths.

“Whenever you get out there, it felt like another game,” he said.

Davidson started with a slider to Altuve for a called strike and retired him on a popup. He reached 95.4 mph and got out of the first by getting Correa to ground into an inning-ending double play.

But he walked three of 11 batters and threw only 28 of 53 pitches for strikes. He allowed two hits, blowing a fastball by Astros pitcher Framber Valdez for his only strikeout.

When Snitker came to the mound to take the ball, third baseman Austin Riley and catcher Travis d’Arnaud walked over to give Davidson pats on the back.

A 19th-round draft pick in 2016 from Midland College in Texas, Davidson made his big league debut on Sept. 26 last year against Boston. He started this season at Triple-Gwinnett and made four big league starts over a month with a 3.60 ERA and no decisions.

He went on the injured list with left forearm inflammation, and his only appearance since was in a Triple-A game Oct. 3.

“I do feel like my stuff was very good,” Davidson said. “Fastball command wasn’t where I wanted it to be. I left some pitches to good hitters over the plate, and they did damage to them.” 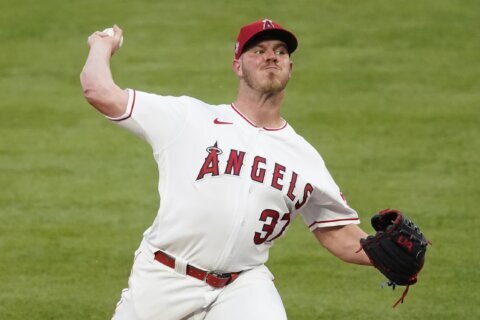