PITTSBURGH (AP) — Bryan Reynolds had four hits, raising his batting average above .300, to help the Pittsburgh Pirates rally from a five-run deficit and beat the Cincinnati Reds 8-6 on Saturday night.

He had a double and triple and is hitting .302 on the season. The three-year veteran batted just .189 during the pandemic-shortened 2020 season after hitting .314 as a rookie.

“It didn’t look like it would happen this year for a while,” Reynolds said of hitting .300. “It was one of my goals this season and I had thought a lot about it and then I just thought it really doesn’t matter if I do it or not. I just kind of relaxed after that and good things happened.”

The Pirates went ahead for good 7-6 in the sixth inning when Reynolds tripled in a run. The Reds had tied it in the top of the inning on Tyler Stephenson’s RBI double.

“The swings he’s taking, he is locked in,” Pirates manager Derek Shelton said. “He is right on pitches. We’re seeing a guy who is a premier hitter.”

The 6-foot-7 Cruz was making his major league debut and became the tallest shortstop in big league history after being called up from Triple-A Indianapolis before the game.

“When I got on the field and I began stretching I felt nothing by excitement,” Cruz said. “I just wanted to get to that shortstop position and get the game started.”

“He hits the ball hard. We saw him hit the ball hard in the minor leagues,” Shelton said. “It was an impressive debut for Oneil. Any time one of your prospects comes to the big leagues, it’s a big night.”

Nick Castellanos and Eugenio Suarez homered for the Reds, who lost their fourth straight game.

Cole Tucker drew a bases-loaded walk from Luis Cessa in the seventh inning to give the Pirates a two-run cushion.

Nick Mears (1-0) got one out for his first major league win and Chris Stratton notched his eighth save with a perfect ninth inning. Tony Santillan (1-3) was the losing pitcher.

The Reds built a 5-0 lead by the middle of the fifth inning and starter Tyler Mahle had checked the Pirates on only one hit to that point. However, Pittsburgh responded with six runs in the bottom of the inning while knocking the 13-game winner from the game.

“All I have to about it is one inning to me doesn’t mean anything to me in the big picture of the entire season,” Reds manager David Bell said. “Tyler had a great year and I want him to know that.”

A sacrifice fly in the first inning by Stephenson, Max Shrock’s RBI single in the third, Suarez’s two-run homer in the fourth and Castellanos’ solo shot in the fifth put Cincinnati ahead 5-0. Suarez hit his 31st homer of the season and Castellanos belted his 34th.

Stephenson and Suarez each had two hits for the Reds.

To open a roster spot for Cruz, right-hander Tanner Anderson was optioned to Indianapolis.

Suarez played in his 1,000th career game. He broke into the major leagues in 2014 with the Detroit Tigers then was traded to the Reds following that season.

Suarez’s 129 home runs since the beginning of the 2018 season are the most in the major leagues.

Reds: SS Kyle Farmer (left abdominal strain) sat out a second straight game and won’t play in Sunday’s season finale. … 2B Jonathan India, a leading contender for NL Rookie of the Year, was rested and could also get Sunday off. 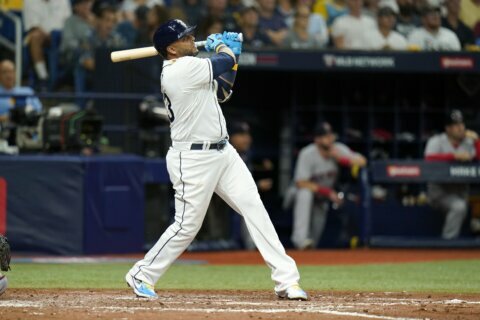 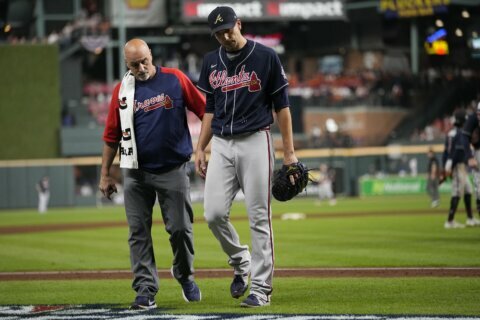