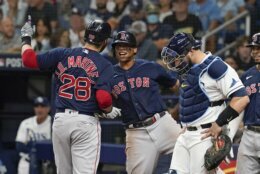 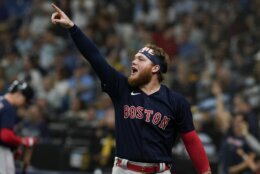 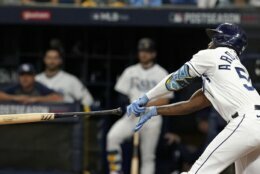 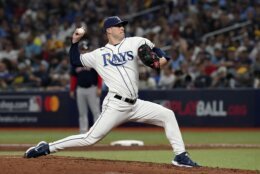 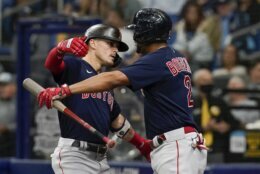 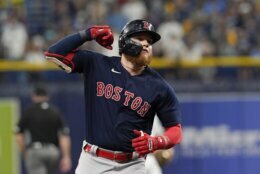 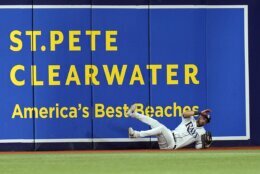 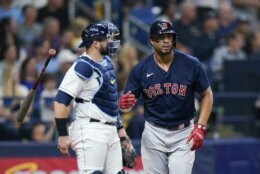 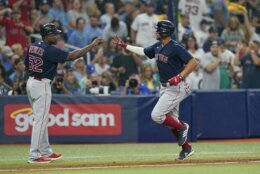 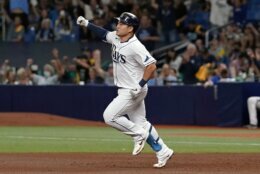 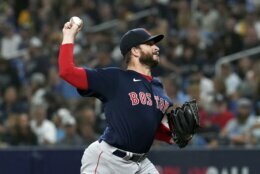 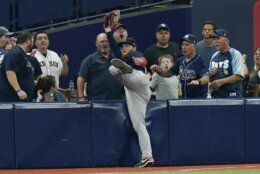 ST. PETERSBURG, Fla. (AP) — Boston slugger J.D. Martinez wasn’t sure how well he’d run, but he thought his sprained left ankle would be OK in the batter’s box Friday.

Lucky for him, the Red Sox took their time rounding the bases all night while turning an early deficit against the Tampa Bay Rays into a blowout win.

Martinez hit a tiebreaking, three-run homer in his return to the lineup and the Red Sox backed Tanner Houck’s clutch relief effort with a franchise postseason record five home runs, rallying past the Rays 14-6 to even their AL Division Series at one game each.

Game 3 of the best-of-five showdown is Sunday in Boston.

Kiké Hernandez had five of Boston’s 20 hits, including a homer and three doubles, becoming Boston’s first player with four extra-base hits in a postseason game.

“Obviously, we had to make adjustments, and Tanner came in and did an outstanding job,” Boston manager Alex Cora said. “But offensively, it was like: `Hey, don’t panic.’ We put up two (runs) in the first, and we still got eight innings. They did an amazing job the whole night.”

“He is definitely a huge piece of that lineup, and I think he showed why today,” Rays catcher Mike Zunino said of Martinez. “He came in, I know coming off an injury, and battling with that isn’t easy. But he had great at-bats all day. You tip your cap.”

Houck (1-0) kept Boston in the game after Sale was rocked for five runs in the first inning. The rookie right-hander came out of the bullpen to start the second inning and allowed one run and two hits over five frames, retiring his first 11 batters before yielding a two-out single to Wander Franco in the fifth.

Ji-Man Choi entered as a defensive replacement for Luplow and had the only other hit off Houck, a two-out solo homer in the sixth. Houck struck out five.

Martinez had four hits after missing Tuesday night’s wild-card victory over the New York Yankees and Game 1 of the ALDS. He was injured stumbling over second base while heading to the outfield during last weekend’s regular-season finale at Washington.

Bogaerts, Verdugo and Hernández had solo shots to steady the staggering Red Sox, who lost the opener 5-0 Thursday night. Martinez then delivered the lead.

Devers’ two-run homer off Michael Wacha hiked Boston’s advantage to 11-6 in the eighth. Christian Vazquez had an RBI infield single in the ninth, which Hernández followed with a two-run single. Bogaerts, Verdugo and Vazquez had three hits each.

“We knew coming in they have a very talented offense, and they just put together a lot of quality at-bats … and just kind of put it on us,” Rays manager Kevin Cash said.

“You chalk it up as a bad game,” Zunino added. “It just wasn’t our night.”

Martinez and Cora both said Boston’s medical staff deserved credit for helping the designated hitter get back on the field.

Verdugo also stole an out in left field, leaning over the short wall in foul territory in the sixth inning to catch Nelson Cruz’s popup.

A night after Randy Arozarena became the first player in major league history to homer and steal home in a postseason game, the Rays got off to another fast start that whipped a yellow towel-waving crowd of 37,616 — up from 27,419 for Game 1 — into a frenzy.

Rays rookie left Shane Baz became the second pitcher in big league history to start a playoff game with three or fewer career regular-season appearances. Matt Moore was the other, doing it with the Rays in Game 1 of the 2011 ALDS at Texas.

In using Baz and Game 1 winner Shane McClanahan to begin the series, AL East-winning Tampa Bay joined Oakland as the only teams to start rookie pitchers in the first two games of a playoff series. The Athletics began the 2012 ALDS at Detroit with Jarrod Parker and Tommy Milone.

Boston, meanwhile, has only gotten 2 1/3 innings combined out of its starting pitchers through two games. Sale, who returned from Tommy John surgery in August to make nine starts down the stretch, was pulled after giving up five runs and four hits in the first inning. That followed an abbreviated outing by Eduardo Rodriguez on Thursday.

Boston replaced injured right-hander Garrett Richards on the ALDS roster with reliever Matt Barnes. Richards has a left hamstring strain and will be ineligible for the AL Championship Series roster if the Red Sox advance.

Nathan Eovaldi will start Game 3 for Boston. He allowed one run and four hits over 5 1/3 innings of Boston’s wild-card win over the Yankees. The right-hander is 2-1 with a 1.63 ERA in seven career postseason appearances, including three starts.

Cash hasn’t announced a starter for Sunday. He could go with right-hander Drew Rasmussen or opt for a bullpen day.