PITTSBURGH (AP) — Pittsburgh Pirates general manager Ben Cherington believes the franchise is starting to take the shape he envisioned when he took over two years ago.

You just need to know where to look. And yes, he knows at the moment it’s not the “win/loss” column following a third straight last-place finish in the NL Central.

Still, Cherington pointed to the development of All-Star center fielder Bryan Reynolds, the steadying influence of veteran catcher Jacob Stallings and the brief late-season cameos of prospects like 23-year-old shortstop Oneil Cruz and 21-year-old pitcher Roansy Contreras as proof that change is coming.

“That’s the start of that identity that you’re talking about,” Cherington said Tuesday. “Over time, the players will become more visible as that roster grows, and the seeds of that, we believe, have started.”

The Pirates began a season with modest expectations by opening 12-11 and went 13-12 over their final 25 games. The issues came in the middle, when poor pitching and an offense that finished last in the majors in runs and home runs struggled. Cherington thinks the team’s competitiveness over the final month is a sign the culture in the clubhouse created by manager Derek Shelton is shifting.

“We know there’s gonna be mistakes over the course of a season, but the effort, not just in games but in practice, that clearly was an area that we think improved this year,” Cherington said. “Generally, you know, the sort of ‘never say die’ (approach). The team came back and had some wins late in the year that, you know, objectively, maybe we shouldn’t have. So it says something about the team.”

While Cherington credited fans for “hanging in there” during the bottom-to-top overhaul, he also knows the Pirates finished 14th in the National League in attendance. Though he wants to win more games at the major league level in 2022, he’s not going to abandon the methodical approach that’s helped him turn Pittsburgh’s farm system into one stocked with considerably more talent than the day he came on board.

“We should be incredibly busy in exploring trade opportunities, exploring free-agent opportunities, but need to do that in a way that fits with the strategy that makes sense to build a winning team,” Cherington said. “Because we know that so much of our success will need to be driven from improvement from young players.”

The core group the Pirates are relying on — from the 6-foot-7 Cruz to Contreras to infielder Nick Gonzalez to pitcher Quinn Priester — are still in various stages of their development. Cruz may have a chance to make the 2022 opening day roster, but it’s more likely he and Contreras start in Triple-A next spring, with Gonzalez and Priester pointed toward Double-A.

Help, real help, is still a ways away, meaning there could still be the kind of roster churn the Pirates saw in 2021, when a franchise-record 64 players suited up at some point.

“We certainly want to keep (adding depth), we just want to do that in a way that doesn’t get in the way of the potential opportunity of a young player that we believe in,” he said.

One of the players the Pirates do believe in is Reynolds. The 26-year-old made the All-Star team for the first time and hit a career-best 24 home runs along with eight triples, tied for the major-league lead. He’s at the same point in his career Andrew McCutchen was after 2011. The team signed McCutchen to a contract extension early in spring training in 2012, a symbolic gesture that not only helped propel McCutchen to stardom but helped the Pirates put together a run of three straight playoff berths from 2013-15.

Reynolds — who remains under team control through 2025 — was polite but noncommittal when asked about sticking around. Cherington said the team remains open to exploring long-term deals in general but declined to mention specific players.

One person who figures to stick around a while is Shelton. Cherington praised his manager’s energy and optimism while the major league roster undergoes a lengthy and not always productive overhaul.

“He pours so much into the job,” Cherington said of Shelton. “He’s so much fun to be around. I believe our team has responded to that through the effort and perseverance we’ve talked about. We’re seeing improvements from the team in different areas, so I’m just really excited to continue to work with him.” 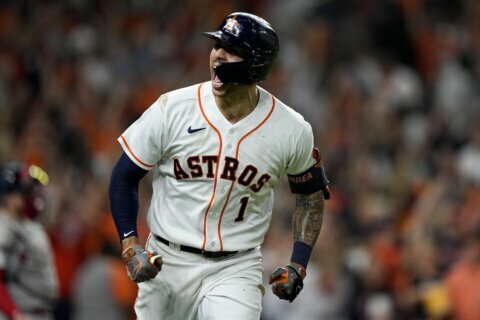