ATLANTA (AP) — For Craig Counsell, the decision to have Freddy Peralta start Monday’s Game 3 of the NL Division Series for the Milwaukee Brewers against the Atlanta Braves was easy.

The manager said he considered no other options.

“Freddy was the starter,” Counsell said Sunday. “That was the plan from probably July.”

The best-of-five series is tied at one game apiece, putting pressure on Peralta and Braves starter Ian Anderson to give his team the edge. Each pitcher has returned from stints on the injured list to feel healthy entering the postseason.

It will be Peralta’s first postseason start.

“It means a lot for me,” Peralta said following the team’s light workout at Truist Park.

“I know it’s going to be a great experience. As a player I always dreamed of this kind of moment because I always watched these kinds of games,” he said.

Peralta won his only start against the Braves this season, pitching six scoreless innings in a 10-9 win at Milwaukee on May 16. The right-hander was 10-5 with a 2.81 ERA in the regular season.

Peralta was on the 10-day injured list from Aug. 19 to Sept. 2 with right shoulder inflammation. He was 1-2 with a 4.70 ERA in five September starts and has not pitched in almost two weeks since his last start on Sept. 26.

“I’ve been working these last few days,” Peralta said. That work included warming up in the bullpen in the eighth inning of Game 1 on Friday.

“For me, that helped a lot because my arm felt a lot better after that day,” Peralta said.

Peralta, 25, has appeared in only one postseason game, pitching three scoreless innings in relief against the Los Angeles Dodgers in the 2018 NL Championship Series.

Anderson, 23, has the edge over Peralta in postseason experience. He is 2-0 with a 0.96 ERA in four postseason games. He started in Game 7 of last season’s NL Championship Series loss to the Dodgers, allowing two runs in three innings.

Anderson said the playoff experience should have a calming effect on Monday’s start.

“I think I’ll be a little bit more comfortable,” Anderson said. “There’s not going to be those first-time nerves kind of because I did go through it last year. And I got that experience. So I think it’s going to be just channeling that energy from the crowd and not getting too overhyped.”

Anderson was 9-5 with a 3.58 ERA this season. A highlight came when he took a no-hitter into the seventh inning of a 5-1 win at Milwaukee on May 15.

He was on the injured list with right shoulder inflammation from July 16 to Aug. 19.

Anderson said he had “a little slower progression than I wanted” after returning from the IL, but he carries momentum into the postseason. He allowed only a combined three runs while winning his last two starts against Arizona and Philadelphia.

He allowed two runs in six innings in the Braves’ 5-3 win over the Phillies on Sept. 30 which clinched Atlanta’s fourth consecutive NL East title.

“I think just the experience that Ian’s had in his short major league career is going to fend for him well,” said Braves manager Brian Snitker. “He’s been on the biggest stage, Game 7 in NLCS. That’s pretty good for a young age. And how he handled himself was extraordinary, I thought.”

The Brewers’ bullpen is missing right-hander Devin Williams and left-hander Brent Suter, who has a strained right oblique. Suter participated in light throwing on Sunday and has a chance to return to the active roster if Milwaukee advances to the NLCS.

“We’re thinking of a progression that would have him ready for the next series,” Counsell said. “… He’s had two good days and on to the next day.”

Williams fractured his throwing hand when he punched a wall the night the Brewers clinched the NL Central. 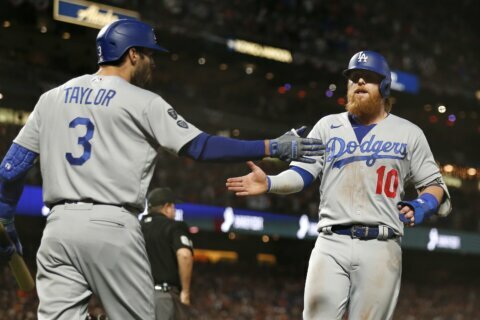