SAN FRANCISCO (AP) — Logan Webb pumped his fists as he set down a star-studded Dodgers lineup all game long, then raised his pitching hand in appreciation after a masterful postseason debut.

Webb struck out 10 while working into the eighth inning, Buster Posey hit a two-run homer that held up, and the 107-win San Francisco Giants blanked defending World Series champion Los Angeles 4-0 on Friday night in the opener of their NL Division Series.

Those two Giants standouts summed up this year perfectly for the NL West champs: A brilliant performance by the young right-hander supported by a veteran catcher who has shined on this big October stage so many times before.

Webb credited Posey’s presence behind the plate in helping him excel.

“Just having him back there, honestly,” Webb said. “He’ll calm me down.”

Kris Bryant and Brandon Crawford also homered to back a combined five-hitter by Webb and a pair of relievers.

Everybody knows this matchup between century-old rivals takes this best-of-five playoff series to another level. They finished with baseball’s two best records, the division coming down to the final day as the Dodgers wound up one game back with 106 wins, ending their run of eight consecutive West crowns.

That meant Los Angeles had to get by the Cardinals in the wild-card game Wednesday night then fly straight to the Bay Area, where a loud crowd packed Oracle Park.

The Dodgers will try to even the series when they send 20-game winner Julio Urías to the mound for Game 2 on Saturday night opposite Giants All-Star right-hander Kevin Gausman.

Webb waved his pitching hand walking off to a rousing ovation in the eighth after a two-out single by Mookie Betts. He didn’t walk a batter while outpitching Dodgers ace Walker Buehler.

“He was out there pretending like it was a game in the backyard,” Bryant said.

Webb joined just two other pitchers to ever win a postseason start with 10 or more strikeouts, no walks and no runs — Jake Arrieta for the Cubs on Oct. 7, 2015, against the Pirates and the Phillies’ Cliff Lee on Oct. 18, 2009, against the Dodgers.

Tyler Rogers relieved for the final out in the eighth and rookie Camilo Doval calmly worked the ninth.

Giants manager Gabe Kapler, making his own playoff debut on the dugout’s top step, had absolute confidence the 24-year-old Webb would shine in the biggest start of his life. Just last Sunday, Webb pitched the Giants past the Padres in the regular-season finale as San Francisco clinched the club’s first division title since 2012. Webb hasn’t lost since May 5 at Colorado.

Featuring a changeup and slider, Webb was in total command. He also turned four comebackers into outs.

“I just think to be quite honest with you we didn’t make adjustments,” Dodgers manager Dave Roberts said.

Tommy La Stella hit a pair of singles and played sparkling defense, getting things started by drawing a five-pitch walk from Buehler in the bottom of the first.

That set things up for Posey, who sat out last year’s coronavirus-shortened season to care for prematurely born adopted twin girls. He clobbered a 3-0 pitch into a water-spraying pillar above the right-field arcade with two outs in the first to send the orange-towel waving sellout crowd of 41,934 into a frenzy.

“The dang column kept me from a splash hit,” Posey cracked with a grin. No right-handed hitter has ever reached McCovey Cove.

Kapler said Posey could play every postseason game, and why not? At age 34, the veteran catcher started five of the final six regular-season games and 10 of 13 overall to end the season. This marked his first postseason home run since Game 4 of the 2012 World Series at Detroit off Max Scherzer.

La Stella stopped Justin Turner’s sharp grounder to second base in the fourth and in the same motion flipped the ball to Crawford, and the shortstop fired to first baseman Wilmer Flores for an inning-ending double play.

This is the first postseason meeting between the storied franchises whose history goes way back to their days in New York. In 1951 and 1962 the teams faced off in a best-of-three NL tiebreaker with the Giants winning each of those in three.

Bryant, acquired in a midseason trade with the Cubs, homered in the seventh for the Giants. Buehler lowered his head with hands on knees as the ball sailed over the left-field fence.

“Obviously it’s on me to try to create some momentum and I kind of sucked that out of our dugout,” Buehler said.

Crawford connected in the eighth.

Buehler had been 7-0 lifetime against the Giants before taking a loss Sept. 5 in the season series finale as San Francisco edged LA 10-9, with the Dodgers holding an 80-78 advantage in runs.

Dodgers: Roberts went with lefty David Price among his 12 pitchers over fellow southpaw Justin Bruihl, who made his major league debut in August and isn’t someone Los Angeles is comfortable with pitching back-to-back days yet. Regarding Price, Roberts noted the pluses, “I think with David, certainly the experience, the ability to add some length, a neutral arm.” In fact, Roberts didn’t rule out considering Price as an opener for Game 4.

Giants: RHP Johnny Cueto was left off San Francisco’s roster after he missed significant time through the season with elbow troubles. “Very tough decision. I think we would have liked to have had him stretched out and perhaps considered him as somebody who could start one of these games for us,” Kapler said. “We just weren’t able to get there, and that’s tough. In particular it’s tough because Johnny has meant so much to the organization.” … 1B Brandon Belt is sidelined by a broken left thumb that he hopes will heal in time for a return in the NLCS should the Giants advance.

“It’s a big game and I will have the maximum focus,” Urías said.

Gausman (14-6, 2.81) was 0-1 over his final four starts following five straight winning decisions. But he allowed one run over seven innings last Saturday in an eventual extra-innings loss to San Diego. 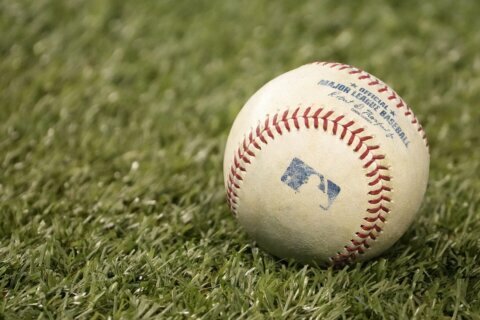