Coronavirus News: Fairfax Co. votes to increase substitute teacher pay | Is it time to get a COVID-19 booster? Which one? | Local cases of COVID-19 | How many in DC region are vaccinated?
Home » MLB News » LEADING OFF: Yanks, Sox,…

Four teams are separated by two games in the AL wild-card chase, with the Yankees clinging to a one-game lead for the top spot with two games remaining.

New York will face Tampa Bay rookie Shane Baz (2-0, 1.69) in his third big league start. The 22-year-old struck out nine Miami batters over 5 2/3 scoreless innings in his previous outing, sparking speculation he could crack the Rays postseason rotation even though he didn’t debut in the majors until Sept. 20.

Boston is a game behind the Yankees with two games left against last-place Washington, while Toronto and Seattle are two games back. The Blue Jays have two games remaining versus lowly Baltimore, and the Mariners are closing things out against the Angels.

The Giants can lock up an unexpected NL West title with a win over San Diego or a Dodgers loss to Milwaukee. San Francisco ensured itself at least a tie for the division crown and matched a franchise record with its 106th win Friday against the Padres, but Los Angeles spoiled its hopes to celebrate an outright clinch by rallying to beat the Brewers.

Kevin Gausman (14-6, 2.87) will start for the Giants against San Diego’s Joe Musgrove (11-9, 3.22) in the afternoon, with the Dodgers hosting Milwaukee on Saturday night.

Dodgers ace Clayton Kershaw isn’t sure if he’ll be able to pitch in the postseason after leaving his start Friday with left forearm discomfort. The left-hander didn’t pitch from July 4 to Sept. 12 while on the injured list with left forearm inflammation and acknowledged after Friday’s game that “it’s not looking great for October right now.”

The good news for Los Angeles is that its rotation is deep, and left-hander Julio Urías has a chance to become the majors’ only 20-game winner this season in a showdown against NL Cy Young Award contender Corbin Burnes of the Brewers.

Burnes (11-4, 2.29) leads the majors in ERA and has been in a tight race for the top pitching prize with Dodgers ace Max Scherzer and Phillies right-hander Zack Wheeler. Urías might pick up some consideration with old-school minded voters with win No. 20.

Several individual stat races are coming down to the wire, including an NL batting crown that’s likely to go either to Dodgers infielder Trea Turner or his former Washington teammate Juan Soto. Turner is hitting .327, just ahead of Soto’s .317. They were both Nationals until Turner and Max Scherzer were dealt to LA in July.

Kansas City’s Salvador Perez is trying to close out the major league home run title. He leads with 48, two ahead of Vladimir Guerrero Jr. and three clear of Shohei Ohtani. Perez also has the most RBIs with 121 and is vying to become the first primary backstop to lead a league in RBIs since Philadelphia’s Darren Daulton took the NL crown with 109 in 1992. 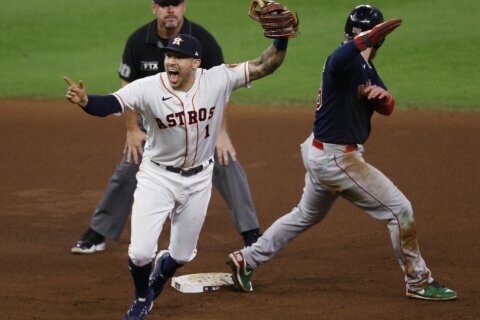 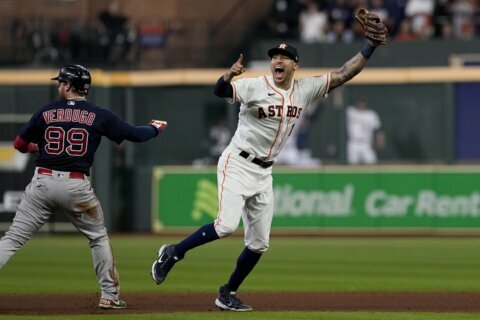 Red Sox run out of fight, fall to Astros in ALCS Game 6