A look at what’s happening around the majors on Tuesday: ___ PLAY IT AGAIN All these years later, the New…
Listen now to WTOP News WTOP.com | Alexa | Google Home | WTOP App | 103.5 FM

All these years later, the New York Yankees and Boston Red Sox are set to meet again at Fenway Park in an all-or-nothing game.

The playoffs open this season with a tasty matchup when the longtime rivals face each other in the AL wild-card game. Yankees ace Gerrit Cole (16-8, 3.23 ERA) is set to start against ex-Yankee Nathan Eovaldi (11-9, 3.75).

The teams both had their high and low points this year before finishing tied at 92-70. The winner will advance to play another division rival, the AL East champion Tampa Bay Rays.

While the focus will be on Aaron Judge, Xander Bogaerts and the guys on the field, there’s bound to be a lot of nostalgia as fans reminisce about the 1978 tiebreaker between the teams, highlighted by Bucky Dent’s three-run homer in the seventh inning that propelled New York to a 5-4 win. Reggie Jackson, Carl Yastrzemski and other stars played that afternoon, but what everyone remembers is Dent’s flyball over the Green Monster.

What will it be this time, the play that fans in the Northeast are still buzzing about 40 years later?

The St. Louis Cardinals and Los Angeles Dodgers work out on the West Coast, a day before they meet in the NL wild-card game.

The teams took very different paths to reach the matchup at Dodger Stadium.

Mookie Betts, Justin Turner and the defending World Series champion Dodgers won a whopping 106 times this year, yet still finished second in the NL West, a game behind San Francisco.

Paul Goldschmidt, Nolan Arenado and the Cardinals were on the outer fringe of the playoff chase until winning a franchise-record 17 straight games in September, putting them into the second wild-card spot.

For a while this summer, Luis Rojas was a potential Manager of the Year contender. Just a few months later, he’s out of a job.

Rojas was let go as New York Mets manager on Monday after two losing seasons. The team declined its option on his contract for 2022, a day after finishing third in the NL East at 77-85 in Steve Cohen’s first year of ownership.

The move was no surprise, the first of several significant changes coming again this offseason for a club in constant turmoil.

“I want to share such heartfelt gratitude to so many in the Mets organization for not only the last two seasons as manager, but for the last 16 years in a variety of roles,” Rojas said in a statement released by the team.

“We live in a results-oriented business, and am deeply disappointed for our staff and fans that we didn’t reach our goals this season,” he said. 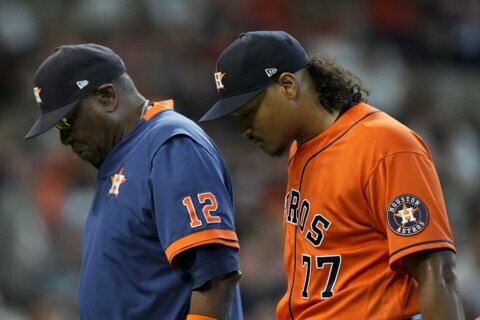