CLEVELAND (AP) — The storybook ending wasn’t in the cards. The Indians finished more than 100 years of being called the Indians without another championship.

But a season that began with promise for Cleveland, melted into mediocrity due to significant pitching injuries, manager Terry Francona’s health issues and an inconsistent lineup that made unwanted history as the only one to be no-hit three times — four, unofficially, if you count a seven-inning doubleheader in July.

Perennial contenders, the Indians went out with a whimper.

They finished 80-82, Cleveland’s first losing season since 2012 and months before Francona arrived to revive the club and lead it back among the AL’s elite. The soon-to-be Guardians — they’ve been the Indians since 1915 — seem far removed from that status now.

However, amid all the losing and due to some of the injuries, Cleveland’s front office was able to make a thorough assessment of one of baseball’s youngest rosters. There were growing pains, but if there’s a silver lining, it’s that some of them might be out of the way.

“We need to be better but I do think they’ve learned something this year and I think the curve was accelerated a bit,” said acting manager DeMarlo Hale, who took over for Francona in late July.

The Indians planned to lean on their strong starting rotation, but a shoulder injury to reigning Cy Young winner Shane Bieber threw the whole season out of whack.

There was a long stretch when Francona or Hale, pitching coach Carl Willis, President Chris Antonetti and general manager Mike Chernoff were meeting daily to map out who would get the ball.

Aaron Civale was the next to drop, shelved by a sprained finger in June when he was leading the majors in wins. Bieber and Civale both came back to pitch again late this season, alleviating concern about their futures.

The Indians were also pleased by growth in young right-handers Cal Quantrill, Triston McKenzie and Eli Morgan, who were forced to develop against major league hitters. That group, along with Zach Plesac, gives the club a formidable nucleus of arms.

The bullpen will need to be restructured for 2022, and Cleveland’s ongoing outfield deficiencies must be addressed if the Guardians are going to contend.

That’s something the Indians, who last won a World Series in 1948, couldn’t do this season.

The 62-year-old manager underwent hip and foot surgeries this summer, and all signs continue to point to Francona returning in 2022. He’s scheduled to speak with the media later this week.

While they missed Francona’s leadership, the Indians played hard to the end while going 30-33 under Hale.

“There’s been some challenges,” Hale said. “It’s been a good experience, but also it’s one I think I was prepared to handle. Under the circumstances that took place with Tito, you kind of jump in with both feet.”

STEADY AS HE GOES

Once again, José Ramírez didn’t let anything slow him down.

The All-Star third baseman had another strong season with 36 homers, 103 RBIs and 27 steals while playing Gold Glove-caliber defense.

The Indians/Guardians hold club contract options for 2022 and 2023 on the 29-year-old, who has become one of baseball’s best all-around players and could be in line for a new, long-term deal.

HEAD OF THE CLASE

The Indians found their closer in Emmanuel Clase.

The rookie right-hander with the 102 mph fastball finished with a 1.29 ERA and 24 saves. He wasn’t perfect, but Clase got better — one earned run in his last 32 appearances — and his control improved later in the season.

Just as impressive, he seized the opportunity to finish games after James Karinchak struggled and was sent to the minors.

Amed Rosario made last winter’s Francisco Lindor trade to the Mets look like a Cleveland win, for one season anyway.

He led the team in average (.282) and hits (155) and produced in the clutch. The 25-year-old may not be a long-term answer at short, but he was more than adequate in the field. It’s possible the Guardians give him another look in the outfield.

The Indians will officially become the Guardians at some point in the near future, likely after the World Series and in time for new merchandise to hit store shelves for the holidays. The team has not disclosed any plans. 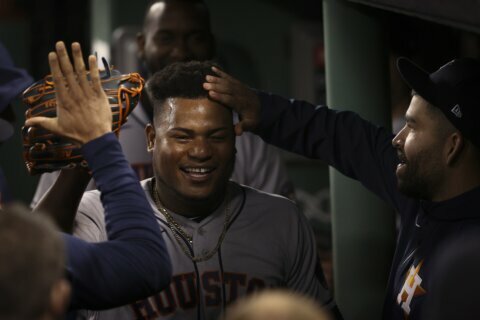