Changing to Guardians: Indians close with 6-0 win at Texas

ARLINGTON, Texas (AP) — Now comes the changing to the Guardians for the Cleveland baseball team that played 107 seasons as the Indians.

Aaron Civale allowed only three singles while pitching six scoreless innings as the Indians played for the final time under that name, after nearly 17,000 games since 1915, winning 6-0 in a season finale on the road against the 102-loss Texas Rangers on Sunday.

“There’s a lot of things being saved and treasured in this. … I hope the fans in the city embrace the Guardians as they come in in 2022,” acting manager DeMarlo Hale said. “There’s going to be a lot of keepsakes. Players, I saw them collect balls, and lineup cards and things like that. It’s one for the memory bank, for sure.”

Yu Chang homered for the Indians (80-82), who finished with their first losing season since 2012 before taking the field as the Guardians next season. That ended a streak of eight consecutive winning seasons, matching the longest in the history of the franchise that was one of the American League’s charter teams in 1901 and became the Indians in 1915.

Four relievers, including right-hander Bryan Shaw in his 81st appearance to get into exactly half the games this season, followed Civale (12-5) to close out Cleveland’s ninth shutout. Shaw extended his franchise record to 459 career relief appearances.

“It’s an honor, for sure,” Civale said. “What we’ve always done, is always represented the city of Cleveland itself. So that’s something we’ll continue to do.”

The Indians wore their dark road jerseys with Cleveland across the front, and no reference to the name that the team announced earlier this year it was changing in the wake of a nationwide reckoning over racist names and symbols.

Cleveland’s new name was selected from over 1,000 entries submitted during the renaming process. The new Guardians logo and uniforms were unveiled to mixed reviews in July.

Even before right fielder Bradley Zimmer caught the final out, a small group of Indians fans chanted chanting “Let’s Go Tribe!” Among those there for the Indians’ last game were two men sitting right behind home plate after flying in from Las Vegas and Orlando, Florida.

The Rangers were shut out for the 15th time and finished with their most losses since 105 in 1973, the franchise’s second season in Texas after moving from Washington. It was their fifth consecutive losing season.

“Civale was really good. It was tough to see,” Rangers manager Chris Woodward said. “He’s really good at mixing up speeds, especially with the curveball. After that, they threw some really good arms at us. They were clearly hellbent on trying to win that game.”

Civale struck out four and walked one over his 82 pitches after going 1-3 in five September starts. The right-hander led the majors in wins with his 10-2 record before spraining the middle finger on his right hand while pitching against the Chicago Cubs on June 21, and didn’t return until last month.

The Indians quickly jumped ahead to stay when Myles Straw led off the game with a single, stole second and scored on Amed Rosario’s single. It was 6-0 after Chang’s ninth homer, a two-run shot in the fifth off reliever Mike Foltynewicz, who allowed 35 homers in 139 innings pitched this season. The only AL pitcher to give up more long balls was teammate Jordan Lyles at 38 in 180 innings.

Shoeless Joe Jackson was among the players in the starting lineup for the 1915 season opener when Cleveland played for the first time as the Indians. The franchise’s first season was 1901 as the Blues, then went by the Broncos in 1902 and the Naps from 1903-14. … Hall of Fame shortstop Lou Boudreau played the most games in an Indians uniform, 1,560 from 1938-50. There are two players in franchise history who played more games overall, but Terry Turner played all but 342 of his 1,619 games before 1915. Hall of Famer Nap Lajoie played all 1,614 of his games from 1902-14.

On a sunny afternoon with the roof open, there was an announced crowd of 28,396 at Globe Life Field, where the Rangers drew 2,110,258 fans this season. The NFL’s Dallas Cowboys drew a crowd of 93,262 for its victory over the Carolina Panthers across the street.

Rangers: RHP Matt Bush was activated from the 60-day injured list after not pitching for Texas since April 7 because of right elbow inflammation. The 35-year-old struck out one pitching a perfect sixth.

Indians: Their first game as the Guardians will be in the 2022 season opener at home March 31 against Kansas City.

Rangers: Texas opens the 2022 season at home March 31 against the New York Yankees. 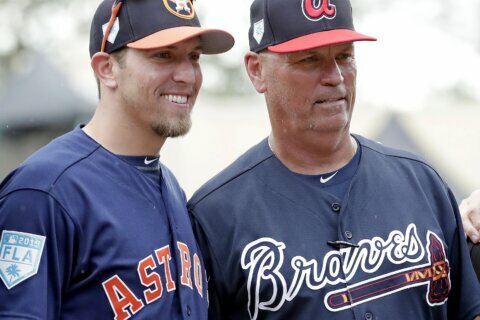