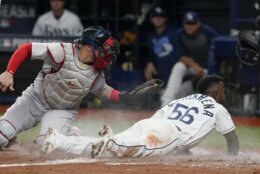 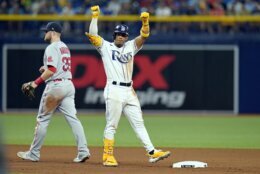 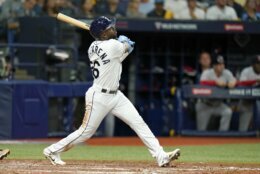 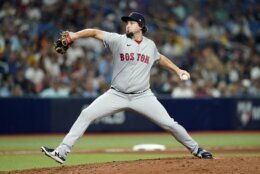 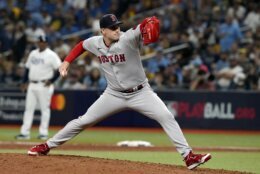 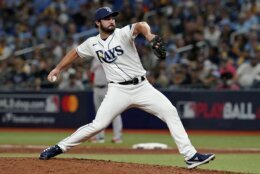 ST. PETERSBURG, Fla. (AP) — Randy Arozarena is off and running in October again.

The rookie showstopper became the first player to hit a home run and steal home in a postseason game, propelling the Tampa Bay Rays to a 5-0 victory over the Boston Red Sox in their AL Division Series opener Thursday night.

The breakout star of October last year, Arozarena made a breathtaking dash to the plate for the first straight steal of home in the postseason since Jackie Robinson did it for the Brooklyn Dodgers against Yogi Berra and the New York Yankees in the 1955 World Series, according to the FS1 broadcast.

“I noticed the pitcher wasn’t really keeping his attention to me. So I was able to take a big enough lead and be able to take that base,” Arozarena said through a translator. “That’s the first time I’ve ever stolen home.”

Nelson Cruz also homered — off a Tropicana Field catwalk — and rookie Shane McClanahan pitched five stellar innings for the AL East champions. Looking comfortable and confident all night, several Rays even snacked on popcorn in the dugout during the game.

Game 2 in the best-of-five series is Friday night, with Chris Sale scheduled to start for Boston against rookie Shane Baz.

Wander Franco also sparkled in his playoff debut, delivering an early RBI double that sent the speedy Arozarena home from first base to get the defending AL champs off to a quick start.

Arozarena, a 26-year-old Cuban who still qualifies as a rookie despite setting postseason records with 10 homers and 29 hits in 20 games a year ago, capped another exhilarating performance by stealing home against lefty reliever Josh Taylor to make it 5-0 in the seventh.

“I think it just happens. You know, I just focus a little bit more,” Arozarena said about his postseason prowess. “Luckily, it’s happening in October. That means it’s closer to the World Series.”

It was the first steal of home of any kind in a playoff game since Javier Báez did it for the Chicago Cubs against the Los Angeles Dodgers in Game 1 of the 2016 NLCS.

Báez took a big lead off third base, drawing a pickoff attempt from catcher Carlos Ruiz. As soon as Ruiz let go of the ball, Baez scampered home and beat an off-balance throw from third baseman Justin Turner to the plate.

Marquis Grissom stole home for Cleveland to end Game 3 of the 1997 ALCS against Baltimore when Omar Vizquel missed a squeeze bunt and the ball deflected off the catcher’s mitt.

“This game is all about history, and any time you are putting your name in those categories like Randy has, I’ve never seen anything like it in 2020, and hopefully I’ll say that here at the end of 2021,” Tampa Bay manager Kevin Cash said.

With one of the lowest payrolls in baseball and a roster lacking household names, the Rays are in the playoffs for a third straight year after winning a franchise-record 100 games and their second consecutive AL East title.

If not for Arozarena’s flashy, crowd-pleasing play and the hitting of the 20-year-old Franco, who was promoted to the majors in June, then McClanahan’s pitching may well have been the story of the night.

The 24-year-old lefty, who made his big league debut during Tampa Bay’s run to last year’s World Series, scattered five hits and struck out three in his first career playoff start.

McClanahan felt good about his outing, but was much more impressed with Arozarena.

“I said it three times tonight: That’s got to be the Rookie of the Year. I don’t think it’s even a competition in my mind,” the pitcher said. “What that guy does every single day on a baseball field is so special.”

Cruz, acquired in July to add a potent bat to the middle of the lineup, hit his 18th career postseason homer for a 3-0 lead in the third. Arozarena also went deep against right-hander Nick Pivetta with the bases empty in the fifth for his 11th homer in 21 career postseason games.

The Red Sox, meanwhile, wasted opportunities to get back in the game, including the eighth inning when they loaded the bases with one out against J.P. Feyereisen. He escaped by striking out Rafael Devers and getting Hunter Renfroe to foul out.

“We had traffic out there, and we just didn’t cash in,” Boston manager Alex Cora said.

Franco chased Pivetta with his second double of the night, an opposite-field hit to left that sent Arozarena scampering from first to third in the seventh. Four pitches later, Arozarena took advantage of Taylor not paying attention to him and took off for the plate.

The Rays lost four straight to Boston before winning 11 of the final 15 meetings during the regular season. And they wasted no time jumping on Rodriguez this time, using their speed to turn a leadoff walk to Arozarena, Franco’s double to left-center and Yandy Diaz’s two-out infield single into a quick 2-0 lead.

Cruz homered off one of the catwalks that support the roof at Tropicana Field, setting off another thunderous ovation from a yellow towel-waving sellout crowd of 27,419 that included college basketball analyst Dick Vitale, a Rays season-ticket holder who threw out the ceremonial first pitch.

The veteran slugger launched a high drive toward left-center, and the ball bounded back into the field of play after hitting a catwalk. By stadium rule, it was a home run.

“I had no clue what was going on,” Cruz said. “I was watching the outfielders. I was like, what happened? Just thank God it was a homer.”

AGE IS JUST A NUMBER

Franco and Cruz are the two biggest additions to this year’s Tampa Bay offense, which ranked second in the majors with 857 runs. With the 20-year-old shortstop and 41-year-old slugger in the lineup, the Rays scored 263 runs in 43 games.

The duo became the second set of teammates to each have a hit in a postseason game when one player was 20 or younger and the other was at least 40. They joined Manny Machado and Jim Thome, who did it in 2012 for the Baltimore Orioles, according to ESPN.

Cruz, meanwhile, became the second-oldest player to homer in the postseason after 43-year-old Julio Franco in 2001.

Baz, an Olympic silver medalist who began the season in Double-A and made his major league debut in late September, will start Game 2 for the Rays.

The Red Sox, who beat the rival Yankees at home in the AL wild-card game to advance to the ALDS, will counter with Sale, who returned from Tommy John surgery in mid-August and went 5-1 with a 3.16 ERA over nine starts down the stretch.