SAN DIEGO (AP) — The San Diego Padres have hired Bob Melvin away from the Oakland Athletics to be their new manager, according to a person with knowledge of the agreement.

The person spoke with The Associated Press on condition of anonymity Thursday because the hiring hadn’t been formally announced. The 60-year-old Melvin will receive a three-year contract, the person said.

Melvin replaces Jayce Tingler, who was fired Oct. 6 after a second-half collapse dropped the Padres from a solid grip on the NL’s second wild card spot to finishing with a losing record for the 10th time in 11 seasons. San Diego finished 79-83 for third place in the talented NL West.

“Bob is the manager in the big leagues that allows you to be you,” said Atlanta Braves catcher Stephen Vogt, who played for Melvin in Oakland. “He doesn’t put any expectations on how you need to play, he lets you go out and be you. All he asks is that you play hard and you play hard for each other.

“He’s an unbelievable communicator, an unbelievable motivator, obviously a genius of a baseball mind, and he puts every single one of his players into a position to succeed.”

The hiring of Melvin is a complete 180 for general manager A.J. Preller, whose previous two managerial hires had no experience as a big league skipper.

Melvin comes into the job with 18 seasons of big-league managerial experience and a 1,346-1,272 record with the A’s, Seattle Mariners and Arizona Diamondbacks. He has been named Manager of the Year three times, including in both leagues.

This year, Melvin became the winningest manager in Oakland team history, but the A’s missed the playoffs following three straight postseason berths. He was 853-764 with the Athletics.

Melvin managed the Mariners for two seasons and the Diamondbacks for five seasons.

It’s unknown whether uncertainty over Oakland’s ballpark situation led Melvin to head to San Diego, but it might have, given the A’s allowed him interview with the Padres with a year left on his contract. Oakland exercised his contract option for 2022 in June.

“As Dr. Seuss says … don’t cry because it’s over, smile because it happened. 10+ years Oakland was able to call Bob Melvin their manager,” A’s ace Chris Bassitt tweeted Thursday night. “He’s truly the best manager in the sport. Be grateful. I sure as hell am.”

The A’s turned to Melvin midway through the 2011 season to replace Bob Geren, whom they fired, and Melvin provided stability the club so desperately needed. He gained respect from his players for being fair, personable and unafraid to take chances on youth.

Melvin takes over a fun-loving team that had five All-Stars — including Fernando Tatis Jr., Manny Machado and Jake Cronenworth — but badly underperformed down the stretch.

“He’s somebody that trusts you from the day you walk in, and that only gets stronger,” Vogt said by phone from Atlanta late Thursday. “He’s somebody that I look up to probably more than anyone in this game, and he is just such a special person and special manager, just an unbelievable leader. The Padres are getting one of the best, if not the best, leader in the game coming into their dugout.”

Oakland won the AL West during the pandemic-shortened, 60-game 2020 season following consecutive wild-card finishes. In the playoffs, the the A’s beat the White Sox in the wild-card round to stop a nine-game losing streak in winner-take-all postseason games — a major league record that dated to the 1973 World Series — before losing to the rival Houston Astros in a four-game AL division series.

In 2012, Oakland became the first team in major league history to win a division or pennant after trailing by five games with fewer than 10 to play, sweeping three games against Texas to win the division. 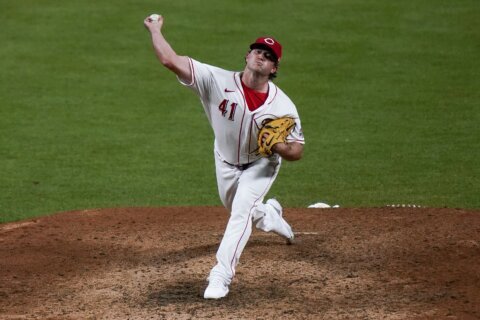