CHICAGO (AP) — Carlos Rodón made the most of the stuff he had. That was enough for manager Tony La…
Listen now to WTOP News WTOP.com | Alexa | Google Home | WTOP App | 103.5 FM

CHICAGO (AP) — Carlos Rodón made the most of the stuff he had. That was enough for manager Tony La Russa.

Rodón pitched five scoreless innings in a closely watched start ahead of the playoffs, and the Chicago White Sox beat the Cincinnati Reds 6-1 on Wednesday night.

“Sometimes you have to go out there and pitch,” he said. “Didn’t have that overpowering fastball but had some secondary stuff and got weak contact.”

Tim Anderson and Gavin Sheets homered as the White Sox (91-68) moved a season-high 23 games above .500 with their fourth consecutive victory. Sheets drove in three runs for the AL Central champions, and Leury García had an RBI single.

Rodón (13-5) allowed one hit, struck out four and walked two in his first start since he lasted just three innings in a 4-3 loss at Detroit on Sept. 20. The All-Star left-hander reported some arm soreness after his previous outing that he described as normal, but it drew some concern from La Russa.

Rodón’s 24 starts and 132 2/3 innings are his highest totals since 2016, well beyond his totals in the previous two years combined. While acknowledging the strain of the increased workload, Rodón said he isn’t going to use that as an excuse.

If Rodón can keep going in the postseason, he could provide a big lift for the White Sox. La Russa said he is interested in how he feels on Thursday.

Rodón improved to 5-0 with a 1.93 ERA over his last six starts. While he didn’t have his usual velocity, topping out at 92.7 mph, he breezed through a Reds lineup missing two of the team’s best hitters. He threw 69 pitches, 43 strikes for strikes.

Delino DeShields hit an RBI double in the ninth for Cincinnati, which finished with four hits. First baseman Joey Votto and outfielder Nick Castellanos rested a day after the Reds (82-77) were eliminated from playoff contention.

“Really good stuff, really good,” manager David Bell said. “Maybe just missed off more than he caught the plate. … Definitely could have been a different night.”

Sheets drove in García with his 11th homer in the third, going deep in back-to-back games for the first time in his career. The rookie also singled in Yoán Moncada in the fourth.

Anderson tacked on his 17th homer in the seventh, a solo drive to right-center off Jeff Hoffman.

Anderson started at shortstop after he decided to appeal a three-game suspension for making contact with umpire Tim Timmons during Monday’s 8-7 win at Detroit. He also was fined.

Michael Kopech pitched three scoreless innings in relief of Rodón, striking out three and walking two. The White Sox are giving Kopech some multi-inning appearances in the final days of the season in case they need an extended outing from him in the playoffs.

Reiver Sanmartin will make his second big league start in Cincinnati’s season finale Sunday at Pittsburgh. The 25-year-old left-hander pitched 5 2/3 innings of one-run ball in the Reds’ 13-1 victory over the Pirates on Monday.

White Sox: OF Adam Engel went 0 for 3 in his return to the starting lineup. He missed five games due to lingering leg soreness.

White Sox: LHP Lance Lynn (10-6, 2.72 ERA) starts Friday night in the opener of a three-game series against Detroit. Lynn is looking for his first win since July 25 at Milwaukee. RHP Wily Peralta (4-4, 3.08 ERA) takes the mound for the Tigers. 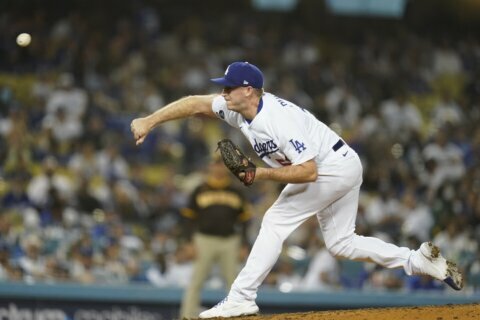