Coronavirus News: The nuance of dealing with COVID-19 | New cases in Montgomery Co. | 'Is It Normal Yet' Podcast: A perfect storm | Latest cases in DC region
Home » MLB News » Polanco goes 4 for…

Polanco connected for his 27th homer in the third. He doubled in the first, fifth and seventh, and then struck out in the ninth.

The 28-year-old Polanco is three homers away from tying the Twins’ single-season record for a switch-hitter set by Chili Davis in 1991.

Franmil Reyes connected to give the Indians at least one homer in a franchise-record 20 straight games. The team’s previous single-season record was set in May 2000.

Twins manager Rocco Baldelli returned to Minnesota on Sunday for the birth of his child. Coach Bill Evers is filling in for Baldelli.

Evers was impressed with Polanco’s performance.

“He takes great pride in every at-bat and understands what he needs to do to get a pitch that he can drive,” Evers said. “Tonight was special. It doesn’t get any better than that. What more can you say about a guy that’s really on fire right now?”

Evers also was pleased to pick up a win for Baldelli.

“Being in the seat was exciting and it was thrilling and it was any adjective that you can think of that was great,” he said. “I was happy for the team and it will make Rocco a lot happier and the happiest moment has yet to come for Rocco.”

The Twins got two in the first against Logan Allen (1-6). Byron Buxton singled, Polanco doubled and Rob Refsnyder drove both of them in with a double to right.

Buxton made it 4-2 with a one-out solo shot in the fifth for his 11th homer.

Michael Pineda (5-8) pitched three scoreless innings for the win in his first career relief appearance. Alex Colomé worked the ninth for his 12th save.

Pineda was activated from the injured list before the game. The right-hander had been sidelined by a strained left oblique.

Reyes’ drive to left-center in the fourth came after José Ramírez’s bunt hit and cut Minnesota’s lead to 3-2. He has homered in three straight games to get to 27 on the year. He was 1 for 20 before connecting for a pinch-hit homer Saturday in Boston.

“They did jump on his fastball,” interim manager DeMarlo Hale said. “He kind of weathered the storm. When I say ‘Weathered the storm,’ he and (Austin) Hedges started mixing their pitches a little bit more and kind of got them a little off balance and he was able to go deeper into the game.”

Indians reliever Justin Garza had his glove knocked off his right hand by Josh Donaldson’s line drive in the seventh. Garza got his glove in front of his face and the ball bounced to the left side of the mound. Ramírez fielded the ball and threw out Donaldson at first.

Pineda made 165 big league starts before coming out of the bullpen. He did not go out for a minor league rehab assignment, and the Twins plan to ease him back before he returns to the rotation.

“It feels a little bit different but I try to be focused and I want to be a normal pitcher,” Pineda said through a translator. “I did it so I’m happy for that. It’s a new opportunity. I feel a little bit excited to do that.”

Twins: 1B Miguel Sanó returned after not playing Sunday because of a bruised left shoulder. He was 0 for 4 with three strikeouts.

Indians: RHP Shane Bieber had a bullpen session before the game and could pitch in a simulated game this week. Bieber, the AL Cy Young Award winner last season, hasn’t pitched since June 13 because of a strained shoulder.

Right-hander John Gant (4-9, 3.98 ERA) will start the second game of the series for Minnesota on Tuesday night. Right-hander Aaron Civale (10-2, 3.32 ERA) pitches for Cleveland. Civale is coming back from a sprained middle finger on his right hand. 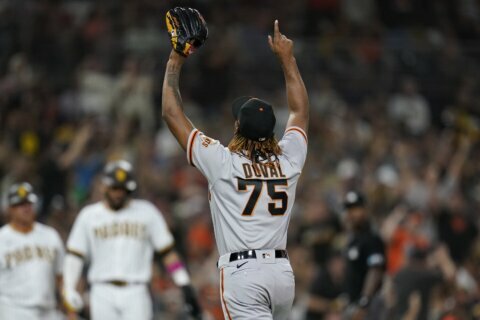